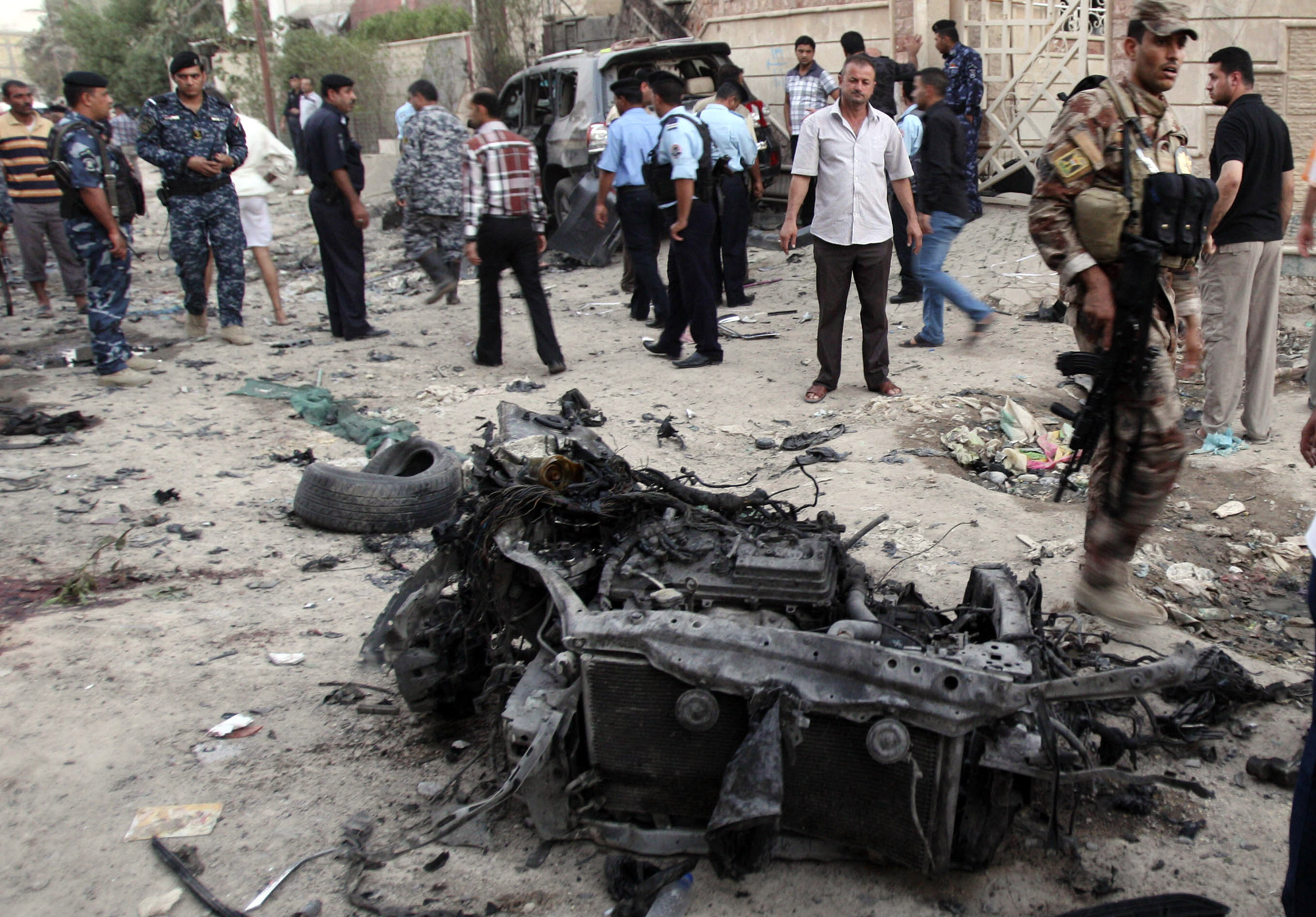 BAGHDAD A wave of coordinated blasts that tore through overwhelmingly Shiite cities shortly before the breaking of the Ramadan fast and other attacks killed at least 38 in Iraq on Sunday, the latest in a surge of violence that is raising fears the country is sliding back toward full-scale sectarian fighting.

Insurgents have been pounding Iraq with bombings and other attacks for months in the country's worst eruption of violence in half a decade. The pace of the killing has picked up since the Muslim holy month Ramadan began Wednesday, with daily mass-casualty attacks marring what is meant to be a month of charity and peaceful reflection.

Violence in Iraq has risen to its deadliest level since 2008, with more than 2,800 people killed since the start of April. The spike in bloodshed is growing increasingly reminiscent of the widespread sectarian killing that peaked in 2006 and 2007, when the country teetered on the brink of civil war.

Insurgents often increased attacks during Ramadan in the years following the 2003 U.S.-led invasion. Pious Muslims go without food, drink, smoking and sex in the daytime during the holy month, when feelings of spiritual devotion are high.

Sunday's explosions struck shortly before the evening iftar meal that ends the daylong fast during Ramadan.

In the deadliest attack, at least eight people were killed and 15 were wounded in the southern port city of Basra when a car bomb and then a follow-up blast went off near an office of a Shiite political party, according to two police officers. Basra is a major oil industry hub 340 miles southeast of Baghdad.

Police reported additional car bomb explosions that left four dead in a commercial street in the Shiite holy city of Karbala, five near an outdoor market in Nasiriyah and six near a Shiite mosque in Musayyib, and more than 60 wounded in total.

All of those attacks hit mostly Shiite communities.

Another blast, this one caused by a roadside bomb, struck late Sunday in a commercial street in the southern Baghdad neighborhood of Dora, killing four people and wounding 16 others, according to police and hospital officials.

It was the second night in a row a deadly bomb went off in the largely Sunni district.

There has been no claim of responsibility for the recent wave of attacks, but Sunni extremists, including al Qaeda's Iraq branch, are believed to be responsible for much of the killing. They frequently target Shiites, security forces and civil servants in an effort to undermine the Shiite-led government in Baghdad.

Sunni insurgents may also be responsible for the attacks in Dora, hoping that the bombings will spark a sectarian backlash. But Shiite militias remobilizing and sending fighters to confront mostly Sunni rebels in neighboring Syria also could be to blame.

Earlier in the day, police said gunmen killed two soldiers in an assault on their security checkpoint in the restive city of Mosul, 360 kilometers (225 miles) northwest of Baghdad.

Hours later, a roadside bomb killed a municipal council member and his son in a town near Mosul. Gunmen in another area just south of Mosul also sprayed a security checkpoint with bullets, killing two policemen.

Hospital officials confirmed those casualty tolls. Officials spoke on condition of anonymity because they weren't authorized to release the information to reporters.

Also on Sunday, a spokesman for Iraq's prime minister said that outgoing Iranian President Mahmoud Ahmadinejad plans to visit Iraq later this week. It will be the Iranian leader's second visit to neighboring Iraq while in office.

Iraq's Shiite-led government has strengthened ties with Tehran since the toppling of dictator Saddam Hussein in 2003. The closeness rankles Sunnis. Many in their ranks believe Baghdad is too friendly with the Shiite powerhouse, the main regional backer of Syria's embattled President Bashar Assad.

Iraqi Prime Minister Nouri al-Maliki's spokesman, Ali al-Moussawi, said Ahmadinejad plans to arrive for a visit to Iraq on Thursday. He said Ahmadinejad would meet with senior Iraqi officials and visit Shiite holy shrines in Najaf and Karbala during the two-day visit.

Ahmadinejad, who leaves office in August, visited Iraq for the first time in March 2008.