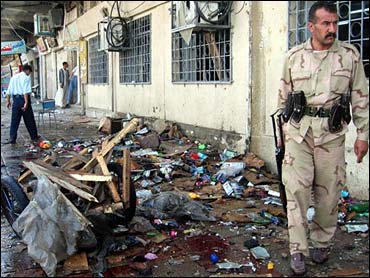 A bomb exploded outside a bank in the northern city of Kirkuk on Tuesday, killing 19 people, including pensioners waiting for checks and child street vendors. The bodies of 24 men killed in ambushes were brought to a Baghdad hospital.

The spree of killings across the country comes as lawmakers wrangle over how big a say Sunni Arab Muslims should have drawing up the country's new constitution. The wrangling threatens to further alienate Sunni Arabs, who fell from power after their patron, Saddam Hussein, was ousted and detained. Sunni Arabs account for most of the insurgents wreaking havoc across Iraq.

The pavement outside the bank was strewn with rubble and glass from the building, while several bodies were seen lying underneath wreckage. At least two cars parked nearby were set ablaze.

The bodies of 24 men — some of which were beheaded — that had been killed in recent ambushes on convoys in western Iraq were brought to a Baghdad hospital, a hospital morgue official Tuesday.

Seventeen of the bodies believed to be all Iraqis were found near Khaldiyah, 75 miles west of Baghdad, Chijan said.

Hospital official Dr. Mohammed Jawad said some of the bodies had been decapitated and the others had been shot in the head.

Jawad said the bodies might belong to men who have been missing since their convoy delivering supplies for the U.S. military was ambushed near Khaldiyah on Thursday.

Two of the bodies were identified as an Iraqi policeman and an interpreter, but it was not immediately clear which company they worked for.

Chijan said the badly decomposed bodies of another seven men, including one Iraqi and six believed to be "Asians," were brought to the hospital after being killed in a convoy ambush several days ago. Most had been shot in the face.

The slain Iraqi was identified as Ahmed Adnan, said his cousin, Hussein Ali, who was interviewed by The Associated Press at the hospital.

Carter Andress, a senior vice president for the company, told the AP in Baghdad that one of the firm's cargo convoys had been ambushed on a highway Sunday west of the volatile Anbar province town of Ramadi.

"One of our cargo convoys was ambushed and we are investigating the incident now," Andress said without providing any further details.

The highway linking Baghdad to Jordan in the west cuts through the volatile Anbar province, a region notorious for kidnappings, ambushes and bombings.