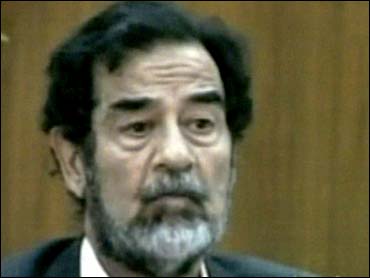 The Iraqi Special Tribunal that will put Saddam Hussein on trial released a new video Monday of the former dictator and four of his former officials being questioned by investigating magistrates.

The video showed a bearded Saddam wearing a dark-gray suit with thin pinstripes and white open-collared shirt being questioned by chief trial judge Raid Juhi. There was no audio.

It was unclear when the video was made and Saddam's chief Iraqi lawyer, Khalil al-Duleimi, did not want to comment. The IST said he was present during the questioning and can be seen on the tape sitting on Saddam's right hand side in gray suit.

At least two legal officials close to the case said that the video was apparently made Sunday. They did not want to be identified for security reasons.

The 68-year-old Saddam looked drawn and tired in the video, the first time he has been seen since his arraignment on July 1, 2004, in Baghdad on broad charges including killing rival politicians over 30 years, gassing Kurds in the northern town of Halabja in 1988, invading Kuwait in 1990 and suppressing the Kurdish and Shiite uprising.

Unlike that appearance, where Saddam was combative and tried to exhibit his authority, the tape shows a man who appears to a shadow of his former self. There are heavy bags under his eyes, he often clasps his hands and squeezes his fingers — clutching them together when apparently trying to make a point. His hair appears unkempt and his beard has more gray flecks running through it than it did a year ago.

In early June, Juhi said in an interview that Saddam's morale had collapsed because of the charges he faces.

"The ousted president has suffered a collapse in his morale because he understands the extent of the charges against him and because he's certain that he will stand trial before an impartial court," Juhi was quoted as saying by the London-based Asharq al-Awsat.

In Amman, Saddam's lawyer said his Jordan-based legal team was not aware that the fallen dictator was questioned.

"Up to this moment, we have no information at all that the president had been questioned," the lawyer, Ziad al-Khasawneh, told The Associated Press. "If it really happened, we consider this move a violation of his basic right to a lawyer during questioning," al-Khasawneh said.

He added that "this shows the kind of justice which the president is expected to endure during the upcoming trial."

Iraqi officials said last week that the ousted leader could appear before a special tribunal within two months, but have since backtracked. Iraqi authorities have also said Saddam will face 14 thoroughly documented cases relating to alleged crimes committed during his 23-year rule. Many carry the death penalty.

An announcement that accompanied the tape said Saddam was being questioned about crimes related to the execution of at least 50 Iraqis in 1982 in the Shiite town of Dujail, 50 miles north of Baghdad, in retaliation for a failed assassination attempt against him.

"The accused Saddam Hussein has been questioned about the Dujail crimes," the IST said in an announcement.

Five men, including Saddam's half brother, were indicted Feb. 28 in the Dujail killings and it probably will be the first case to come to trial.

Saddam, who is being held in a U.S.-run detention facility near Baghdad airport, was captured in December 2003.

The other four men on the video tape were identified as Hussein Rashid Mohammed, a former Republican Guard general, and Taher Tawfiq al-Ani, a senior Baath party official and adviser on Kurdish affairs.

They were questioned concerning the 1987-88 Anfal campaign, a depopulation plan in which hundreds of thousands of Kurds were killed or expelled from northern Iraq. Rashid Mohammed was de a deputy chief of staff during Anfal and was among the few who remained with the dictator until his final days.

They were questioned about the 1991 suppression of a Shiite uprising in southern Iraq.