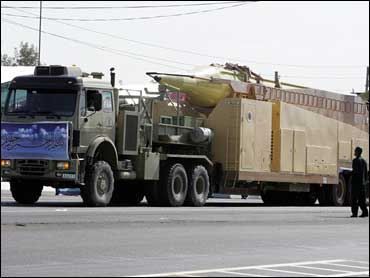 Iran's successful test of a nuclear-capable missile demonstrates its "very active and aggressive military program" that is worrisome to the world, the State Department said Friday.

The announcement in Tehran said the missile's range would depend on the weight of its warhead. Iran's air force chief, Gen. Hossein Salami, said independently guided payloads could hit several targets simultaneously.

State Department deputy spokesman Adam Ereli said he had no technical details on the test firing, but "I think it demonstrates that Iran has a very active and aggressive military program under way."

The description, he said, includes "efforts to develop weapons of mass destruction, as well as delivery systems."

"I think Iran's military posture, military development effort, is of concern to the international community," Ereli said. Evidence, he said, "is the kind of consensus you're seeing with regard to their nuclear program as well as other nonproliferation concerns."

"Iran has reacted with defiance to the Security Council reprimand," says CBS News foreign affairs analyst Pamela Falk from the United Nations, "and coupled with its testing of radar-zapping missiles, Iran's threats are becoming more tangible."

After weeks of difficult negotiations, the U.N. Security Council asked the United Nations' nuclear watchdog, the International Atomic Energy Agency, to report back in 30 days whether Iran was complying with demands to stop enriching uranium.

Enrichment is used in civilian nuclear power, which is what Iran says it nuclear program is for, but can be increased to a level usable only in the manufacture of nuclear weapons. The Security Council statement omitted any mention of sanctions, which the United States had sought.

From Cancun, Mexico, where he is meeting with the leaders of Mexico and Canada, President Bush emphasized opposition to Iran's nuclear program and said the world was united with Washington.

He declined to say whether the United States would seek sanctions against Iran. Mr. Bush did note that Secretary of State Condoleezza Rice was in Europe trying to build a consensus with allies on the next steps.

Also, Israel said the Iranian announcement is cause for international concern.

Iran is showing a video clip of the launch of a missile that it says can duck radar, avoid anti-missile weaponry and hit several targets at once with multiple warheads.

The disclosure comes at the same time that Tehran says it will keep enriching uranium —in defiance of the Security Council.

A spokesman for the Israeli Foreign Ministry says the combination of nuclear weapons and delivery systems with "extremist jihadist ideology" can't be ignored.

An Israeli consultant on the peace process says Iran's test-firing "escalates the arms race" with Iran.

Andy Oppenheimer, a weapons expert at Jane's Information Group, said the missile test could be an indication that Iran has MIRV capability. MIRV refers to multiple independently targetable re-entry vehicles, which are intercontinental ballistic missiles with several warheads, each of which could be directed to a different target.

"From the description, it could be a MIRV. If you are saying that from a single missile, separate warheads can be independently targeted then yes, this is significant," he said.

"But we don't know how accurate the Iranians are able to make their missiles yet, and this is a crucial point," Oppenheimer said. "If the missile is adaptable for nuclear warheads, then they are well on the way. But they have not made a nuclear warhead yet. The current estimates are it could take five years."

The existing rocket is the Shahab-3, which means "shooting star," and also is capable of carrying a nuclear warhead.

Israel and the United States have jointly developed the Arrow anti-ballistic missile system in response to the Shahab-3.

Iran launched an arms development program during its 1980-88 war with Iraq to compensate for a U.S. weapons embargo. Since 1992, Iran has produced its own tanks, armored personnel carriers, missiles and a fighter plane.

Salami said Friday the Iranian-made missile was test-fired as large military maneuvers began in the Persian Gulf and the Arabian Sea. The maneuvers are scheduled to last a week and will involve 17,000 Revolutionary Guards as well as boats, fighter jets and helicopter gunships.