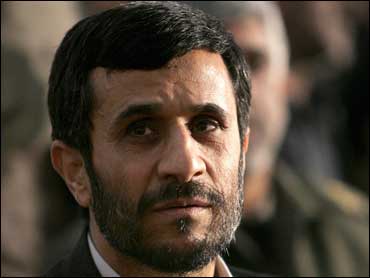 Hard-line President Mahmoud Ahmadinejad has banned all Western music from Iran's state radio and TV stations — an eerie reminder of the 1979 Islamic revolution when popular music was outlawed as "un-Islamic" under Ayatollah Ruhollah Khomeini.

Today, though, the sounds of hip-hop can be heard blaring from car radios in Tehran's streets, and Eric Clapton's "Rush" and the Eagles' "Hotel California" regularly accompany Iranian broadcasts.

No more — the official IRAN Persian daily reported Monday that Ahmadinejad, as head of the Supreme Cultural Revolutionary Council, ordered the enactment of an October ruling by the council to ban all Western music, including classical music, on state broadcast outlets.

"Blocking indecent and Western music from the Islamic Republic of Iran Broadcasting is required," according to a statement on the council's official Web site.

The Iranian guitarist Babak Riahipour lamented what he called a "terrible" decision. "The decision shows a lack of knowledge and experience," he said.

Music was outlawed by Khomeini soon after the 1979 revolution; Khomeini claimed it was "intoxicating." Many musicians went abroad and built an Iranian music industry in Los Angeles.

But as revolutionary fervor started to fade, some light classical music was allowed on Iranian radio and television; some public concerts reappeared in the late 1980s.

But later, Khomeini allowed classical music to be played over state radio. Since his death, pop music has been creeping into Iranian shops.

In the 1990s, particularly during the presidency of reformist Mohammad Khatami starting in 1997, authorities began relaxing restrictions further. These days in Iran, Western music, films and clothing are widely available in Iran. Bootleg videos and DVDs of films banned by the state are widely available on the black market.

However, women are prohibited from singing in public, except to a segregated female-only audience. Hard-liners were afraid the voice of a woman soloist might arouse impure thoughts in men. Women are allowed to sing as part of a chorus.

Ahmadinejad's order means the state broadcasting authority must execute the decree and prepare a report on its implementation within six months, according to the IRAN Persian daily.

Earlier this month, Ali Rahbari, conductor of Tehran's symphony orchestra, resigned and left Iran to protest the treatment of the music industry in Iran.

Before leaving, he played Beethoven's Ninth Symphony to packed Tehran theater houses over several nights last month — its first performance in Tehran since the 1979 revolution. The performances angered many conservatives and prompted newspaper columns accusing Rahbari of promoting Western values.

The ban applies to state-run radio and TV. But Iranians with satellite dishes can get broadcasts originating outside the country.

Ahmadinejad won office in August on a platform of reverting to ultraconservative principles, following eight years of reformist-led rule under Khatami.

During his presidential campaign, Ahmadinejad also promised to confront what he called the Western cultural invasion of Iran and promote Islamic values.

Since then, Ahmadinejad has jettisoned Iran's moderation in foreign policy and pursued a purge in the government, replacing pragmatic veterans with former military commanders and inexperienced religious hard-liners.

He also has issued stinging criticisms of Israel, calling for the Jewish state to be "wiped off the map" and describing the Nazi Holocaust as a "myth."

"Supervision of content from films, TV series and their voice-overs is emphasized in order to support spiritual cinema and to eliminate triteness and violence," the council said in a statement on its Web site.

The council has also issued a ban on foreign movies that promote "arrogant powers," an apparent reference to the United States.

The prohibitions mirror those imposed in neighboring Afghanistan during the Taliban regime, which imposed a strict version of Islamic law, including a ban on music and film. The Taliban was ousted by a U.S.-led coalition in late 2001.