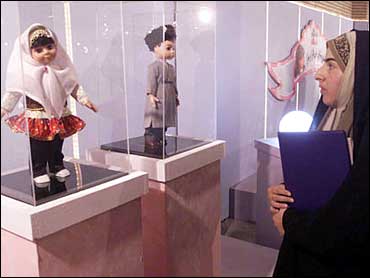 Iran has introduced its version of Barbie and Ken: twin dolls Dara and Sara, who promote traditional values with their modest clothing and pro-family stories.

The Dara and Sara dolls, one a boy and the other a girl, were developed and are being marketed by the Institute for the Intellectual Development of Children and Young Adults, a government agency affiliated with the Ministry of Education.

They are widely seen as an effort to counter the American dolls and accessories that have flooded the Iranian market, though institute director Mohsen Chiniforoushan said at a news conference Tuesday that that was not the main goal.

"The dolls are most welcome. Dara and Sara are strategic products to preserve our national identity. And of course, it is an answer to Barbie and Ken, which have dominated Iran's toy market," toy seller Mehdi Hedayat said.

Another toy seller, Masoumeh Rahimi, said Barbie was "foreign to Iran's culture" because some of the popular Western dolls wear revealing clothing. She said young girls who play with Barbie, a doll she sees as wanton, could grow into women who reject Iranian values.

"I think every Barbie doll is more harmful than an American missile," Rahimi said.

Dara and Sara were born as characters in elementary school books. Their story continues in tales in verse recorded on cassettes that hit stores along with the dolls Tuesday. In their adventures the brother and sister help each other solve problems and turn to their loving parents for guidance.

All four models of Sara come with a white headscarf to cover either black or brown curls. One outfit consists of a knee-length, loose orange shirt, blue pants and white socks. Another is a flower-dotted shirt and a full-length flower-dotted white chador, a robe covering the body from head to toe.

Almond-eyed Sara and her brother are described as 8-years-old. It's OK for 8-year-old girls to appear in public without a headscarf in this officially Islamic republic where women are legally obliged to dress modestly though some clerics encourage even 6-year-old girls to cover their hair when they're outside their homes.

Dara comes in two outfits - black pants, a white shirt and a black jacket or a beige shirt, blue pants and red jacket.

Chiniforoushan said the launch of the foot-tall dolls had been delayed five years after the quality of the first, Iranian-made samples did not satisfy his institute. Currently produced in China, Iran plans to import the modern technology to produce quality dolls.

He said 100,000 dolls were introduced to the market Tuesday,

On the verge of Iran's new year, which begins March 21, Dara and Sara calendars also were introduced Tuesday. Chiniforoushan said his institute plans to produce accessories, including pens, pencils, notebooks and rulers, and one day to export the dolls.

Dara and Sara each sell for $15. Genuine Barbies sell for $40, and Iranian-made copies sell for $3 in a country where the average monthly salary is $100.