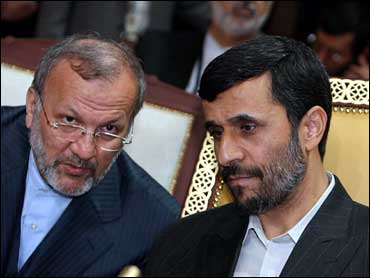 Foreign Minister Manouchehr Mottaki was referring to a U.S. intelligence assessment released Monday that reversed earlier claims that Iran had restarted its weapons program in 2005 after suspending it in 2003.

Iran touted the new report as vindication of its longtime claims that its nuclear program is peaceful. The initial response by Iranian officials was measured, without the heated rhetoric that has marked the confrontation with the United States over its nuclear program. There was no immediate comment from hard-line President Mahmoud Ahmadinejad.

Iranian Foreign Minister Manouchehr Mottaki said it was "natural that we welcome ... countries that correct their views realistically which in the past had questions and ambiguities about (Iran's nuclear activities)."

"Remarks by Bush and other U.S. administration officials, who have continuously talked about the danger of Iran's nuclear program, are baseless and unreliable," Hosseini said.

The new U.S. intelligence report Monday concluded that Iran's nuclear weapons development program has been halted since the fall of 2003 because of international pressure.

The finding is part of a National Intelligence Estimate on Iran that also cautions that Tehran continues to enrich uranium and still could develop a bomb between 2010 and 2015 if it decided to do so.

In the previous intelligence assessment in 2005, U.S. agencies believed Tehran was determined to develop a nuclear weapons capability and was continuing its weapons development program. The new report concludes that Iran's decisions are rational and pragmatic, and that Tehran is more susceptible to diplomatic and financial pressure than previously thought.

"Tehran's decision to halt its nuclear weapons program suggests it is less determined to develop nuclear weapons than we have been judging since 2005," says the unclassified summary of the secret report.

Mohamed ElBaradei, head of the U.N. nuclear watchdog agency, said the report "should help to defuse the current crisis." He said the U.S. intelligence findings were consistent with the findings of his agency.

ElBaradei "urges all parties concerned to enter without delay into negotiations. Such negotiations are needed to build confidence about the future direction of Iran's nuclear program" and "bring about a comprehensive and durable solution" to Iran's standoff with the U.N., the International Atomic Energy Agency said in a statement.

British Prime Minister Gordon Brown's spokesman Michael Allam said, "The report confirms we were right to be worried about Iran seeking to develop nuclear weapons. It also shows that the sanctions program and international pressure has had some effect."

CBS News correspondent Elizabeth Palmer reports that those sanctions are already on the drawing board that they do specifically try and stop money and much needed investment from flowing into Iran.

There was no immediate comment from Russia or China, which have resisted pressure for new sanctions and hold veto powers at the United Nations.

"Although Iran still needs to clarify some important aspects of its past and present nuclear activities, the agency has no concrete evidence of an ongoing nuclear weapons program or undeclared nuclear facilities in Iran," ElBaradei said in a statement.

Russia's foreign minister said Tuesday that Iran has promised to answer all outstanding questions of the U.N. nuclear watchdog.

"(Iran's) Security Council secretary told us about their cooperation with the IAEA and elaborated on the plans of the IAEA and Iran to close all outstanding issues in the nearest time possible," Sergey Lavrov told reporters after President Vladimir Putin's meeting with Iran's top nuclear negotiator, Saeed Jalili.

"We are taking note of Tehran's determination to fully cooperate with the IAEA. We also appreciate Iran's adherence ... to the treaty on nonproliferation of nuclear weapons and observing all of its content," Lavrov said.

The findings come at a time of escalating tensions between the United States and Iran, which President Bush has labeled part of an "axis of evil," along with Iraq and North Korea.

He also asserted that the report means "nothing's changed."

In October, Mr. Bush said, "If you're interested in avoiding World War III, it seems like you ought to be interested in preventing them (Iran) from having the knowledge necessary to make a nuclear weapon."

Rand Beers, who resigned from Mr. Bush's National Security Council just before the Iraq war, said the report should derail any appetite for war on the administration's part, and should reinvigorate regional diplomacy. "The new NIE throws cold water on the efforts of those urging military confrontation with Iran," he said.

"There are differences in the assessments of different organizations in the world about this, and only time will tell who is right," Defense Minister Ehud Barak told Army Radio.

On Monday, senior intelligence officials said they failed to detect Iran's fall 2003 halt in nuclear weapons development in time to reflect it in the 2005 estimate.

One of the officials said Iran is the most challenging country to spy on - harder even than North Korea, a notoriously closed society. "We put a lot more collection assets against this," the official said, "but gaps remain." The officials spoke on condition of anonymity because of the sensitivity of the subject.

Mr. Bush was briefed on the 100-page document on Nov. 28. National Intelligence Estimates represent the most authoritative written judgments of all 16 U.S. spy agencies. Congress and other executive agencies were briefed Monday, and foreign governments will be briefed beginning Tuesday, the officials said.

The intelligence officials said they do not know all the reasons why Iran halted its weapons program, or what might trigger its resumption. They said they are confident that diplomatic and political pressure played a key role, but said the U.S. invasion of Iraq, Libya's termination of its nuclear program and the implosion of the illegal nuclear smuggling network run by Pakistani scientist A.Q. Khan also might have influenced Tehran.

To develop a nuclear weapon, Iran needs to design and engineer a warhead, obtain enough fissile material, and build a delivery vehicle such as a missile. The intelligence agencies now believe Iran halted warhead engineering four years ago and as of mid-2007 had not restarted it.

But Iran is still enriching uranium for its civilian nuclear reactors that produce electricity. That leaves open the possibility that fissile material could be diverted to covert nuclear sites to produce highly enriched uranium for a warhead.