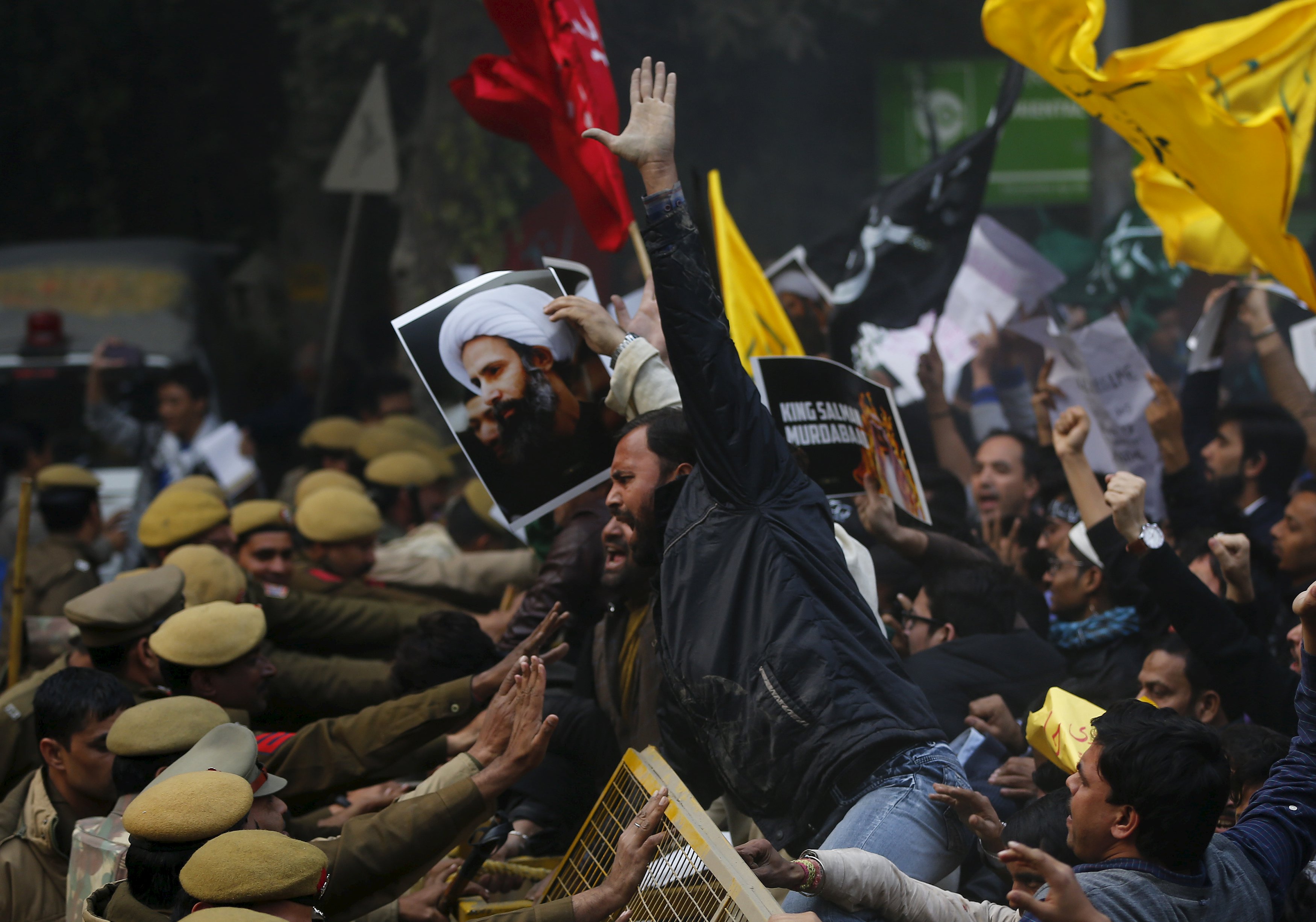 TEHRAN, Iran -- Iran's president said on Tuesday that Saudi Arabia cannot "cover up" its crime of executing a leading Shiite cleric by severing diplomatic relations with the Islamic Republic, even as the kingdom's allies began limiting their links to his country.

President Hassan Rouhani's comments came as Kuwait announced it had recalled its ambassador to Iran over attacks on Saudi diplomatic missions in the Islamic Republic.

The execution last weekend of Sheikh Nimr al-Nimr, a Shiite cleric and opposition figure in Saudi Arabia, has heightened the Saudi-Iran regional rivalry, threatening to derail already-shaky peace efforts over the wars in Syria and Yemen.

"The Saudi government has taken a strange action and cut off its diplomatic relations with the Islamic Republic of Iran to cover its crimes of beheading a religious leader in its country," Rouhani said. "Undoubtedly, such actions can't cover up that big crime."

The diplomatic standoff between Iran and the kingdom began Saturday, when Saudi Arabia executed Shiite cleric Sheikh Nimr al-Nimr and 46 others convicted of terror charges - the largest mass execution carried out by the kingdom since 1980. It's not clear whether al-Nimr was beheaded with a sword, though Saudis routinely use that form of execution.

Al-Nimr, a central figure in the Arab Spring-inspired protests by Saudi Arabia's Shiite minority, was executed after being convicted of sedition and of other crimes, though he long denied advocating violence. News of his execution has sparked Shiite protests from Bahrain to Pakistan.

In Iran, protesters responded by attacking the Saudi Embassy in Tehran and its consulate in Mashhad. Late Sunday, Saudi Foreign Minister Adel al-Jubeir announced the kingdom would sever its relations with Iran over the assaults, giving Iranian diplomatic personnel 48 hours to leave his country.

Sudan and the tiny island kingdom of Bahrain said Monday they would sever ties with Iran The United Arab Emirates announced it would downgrade ties to Tehran to the level of the charge d'affaires, while other nations issued statements criticizing Iran.

On Tuesday, Kuwait announced the recalling of its ambassador in a statement carried on the state-run Kuwait News Agency, without elaborating. It wasn't immediately clear how the Kuwait-Iran diplomatic ties would be affected by the move.

Tiny Kuwait is home to both Shiites and Sunnis living in peace and has the most free-wheeling political system among all Gulf nations.

Iran expressed "regret" over the attacks on the diplomatic missions in a letter to the United Nations on Monday and vowed to arrest those responsible. In the letter, obtained by The Associated Press, Iran's U.N. envoy Gholamali Khoshroo said more than 40 protesters have been arrested and that authorities are searching for other suspects.

In response to a Saudi letter, the U.N. Security Council late Monday strongly condemned the attacks by Iranian protesters on Saudi diplomatic posts. The council statement, agreed to after hours of negotiations, made no mention of the Saudi executions or the rupture in Saudi-Iranian relations.

Saudi Arabia and Iran have long vied for influence in the Middle East. Their rivalry deepened following the toppling of Saddam Hussein in Iraq and the chaos of the Arab Spring, which gave rise to proxy wars in Syria and Yemen.

World powers have sought to calm the tensions. On Monday, Germany called on both sides to mend ties, while Russian state news agency RIA Novosti quoted an unnamed senior diplomat as saying Moscow is ready to act as a mediator.

The U.N. envoy for Syria, Staffan de Mistura, was en route to Riyadh on Monday with plans to later visit Tehran. Iran, a staunch supporter of embattled Syrian President Bashar Assad, and Saudi Arabia, a key backer of the opposition, have participated in three rounds of international talks aimed at ending the conflict. De Mistura has set a Jan. 25 target date for a fourth round of talks.

The White House urged Saudi Arabia and Iran to not let their dispute derail efforts to end the Syrian civil war.