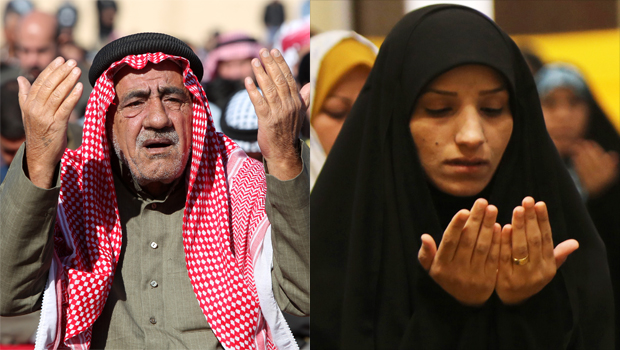 When we watch the news and see reporters talking about the conflicts that are playing out across the Middle East, we hear a lot about fighting between the Sunnis and the Shiites, the two main sects of Islam. But many of us have no idea what the actual difference between the two groups is, and why there is so much friction between them.

So let's take a look at some of the history and the geopolitics to get a sense of what is really going on.

There are 1.6 billion Muslims across the world. Roughly 85% of them are Sunnis.

The division began after the death of the Prophet Mohammed some 1,400 years ago, as a disagreement about who should succeed him.

The Sunnis felt that Abu Bakr, a close friend of the prophet's, ought to be the next Muslim leader.

But the Shiites claimed that Mohammed had annointed his son-in-law, Ali, as his rightful successor.

The Sunnis won out, but a split was born, and that rift was cemented when Ali's son was later killed by the ruling Sunni's troops -- an event which the Shiites commemorate every year.

Fast-forward more than a thousand years, and the situation is worse than ever. According to a poll by Pew Research, some 40% of Sunnis don't even regard Shiites as real Muslims.

But there's more than theology at work here. Perhaps even more important is geography.

One hundred years ago, around the time of the First World War, the Middle East was carved up in a Franco-British pact called the Sykes-Picot Agreement. But the Europeans had little interest in understanding the religious and ethnic intricacies of the Middle East when they divided up the region. Still, these arbitrary borders became the blueprint for today's maps.

The Shiites were divided primarily among Iran, Iraq and Lebanon, with Alawites (an off-shoot of Shia Islam) in Syria. This area has come to be known as the Shia crescent.

Sunni Muslims make up the bulk of the population of other countries in the region, with pockets of Shiites scattered among them.

As you might expect, problems arise in countries where both sects are vying for power, or one feels oppressed. In Syria, for example, a Sunni majority has been ruled for the last 45 years by an Alawite minority.

In Iraq, a Sunni minority ruled over the Shiite majority for decades. After the U.S. invasion, Saddam Hussein -- a Sunni -- was overthrown, and a Shiite government took over. That government proceeded to marginalize the Sunnis, and now some of those disenfranchised Sunnis have gone on to form the so-called Islamic State, or ISIS.

Let's do a quick who's-who in the Middle East: Al Qaeda and ISIS are Sunni Muslim groups. Hezbollah is Shiite.

Osama bin Laden was a Sunni. Syrian President Bashar al-Assad is an Alawite. And the Iranian mullahs are Shiites as well, which helps explain why Iran has gotten involved in the conflict in Syria.

And where does America stand in all this?

Traditionally, the U.S.'s strongest allies in the region have been Sunni powers, like Saudi Arabia, Egypt and Jordan. But now the U.S. is pursuing a nuclear deal with Shiite Iran, and is working alongside Shiites in Iraq to try to destroy ISIS. But at the same time, Washington still supports Saudi Arabia, which is currently bombing Iran-backed Shiite rebels in Yemen. Confused yet?

One satirist summarized the tangled web of conflicting relationships with this map:

So what we can conclude? At the end of the day, it's important to remember that the majority of ordinary Sunnis and Shiites do not hate each other, and both groups share the same core tenets of Islam.

In a sense, it's similar to the differences between, say, the Catholics and the Protestants.

And the fighting and the bloodshed going on across the region today are less about religion than they are about power.