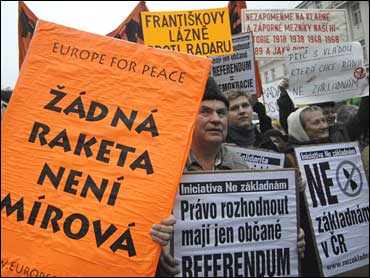 The United States says it will not alter plans to build a missile defense system in Europe despite findings by U.S. intelligence agencies that Iran does not have an active nuclear weapons program - the very threat that Washington used to sell its system to wary allies.

Now U.S. officials may have a harder time persuading its allies that the installation of radar systems in the Czech Republic and interceptors in Poland, at a cost of more than $4 billion, is still necessary.

Already, a Czech official responsible for explaining the need for the missile defense system to the public in his country says his job has become more difficult after the U.S. National Intelligence Estimate (NIE) on Iran was released Monday.

The report, reflecting analyses of all 16 U.S. intelligence agencies, concluded that Iran suspended its attempt to build a nuclear weapon four years ago.

While Washington was abuzz with talk of how the latest information - which has been circulated in private and in classified form as long ago as last year - might alter the administration's policies with Iran now that it has been made public, the Bush administration is continuing to portray business as usual.

"I don't see that the NIE changes the course that we're on," U.S. Secretary of State Condoleezza Rice told reporters aboard her plane as she flew to Belgium Thursday for a conference of NATO foreign ministers.

In addition to attending talks between the alliance and former Cold War foe Russia, which (along with China) has been particularly resistant to new sanctions, Rice is expected to urge greater international pressure on Iran to halt uranium enrichment and answer questions about its nuclear programs.

"In fact, I would think given the assessment that Iran is indeed susceptible to coordinated international pressure that (this) is the right approach," she said, referring to the NIE finding that Iran halted its nuclear weapons program in 2003 due to intense diplomatic activity.

Rice stressed the U.S. case for continued isolation of the Iranian regime.

Bush administration officials have conceded that their abrupt abandonment of the point of its weapons program will likely hurt their efforts to impose more sanctions on Iran to increase pressure for it to cease uranium enrichment and reprocessing, which could produce the ingredients for a bomb. Washington has until now spoken approvingly of Iran's pursuit of nuclear power for energy purposes.

The United States has said that the sites chosen for its missile defense system were selected to counter a threat from Iran, but Russia has objected strenuously to the plans, arguing that the system could undermine the deterrence of its nuclear arsenal. The disagreement has led to the worst friction in U.S.-Russian relations since the Cold War.

That effort now seems more complicated by a perception that the administration has oversold the threat from Iran. On October 23, for example, President Bush said,

"The need for missile defense in Europe is real and I believe it's urgent. Iran is pursuing the technology that could be used to produce nuclear weapons, and ballistic missiles of increasing range that could deliver them."

"The United States has been adamant in not tying missile defense plans in Europe to a threat from Russia," says Julianne Smith, director of the Center for Strategic and International Studies' Europe program. "If you knock down the threat from Iran, it complicates the communications strategy."

Rice also sought to downplay remarks by Russia's Foreign Minister, who accused the U.S. of backtracking on missile defense issues.

"There has been a serious rollback from what we were told," Sergey Lavrov said, referring to a meeting he had with Rice in October.

Lavrov said in Moscow Wednesday the United States has withdrawn a proposal for constant Russian monitoring of planned U.S. missile defense facilities in Eastern Europe, and has rejected the idea of jointly evaluating threats that would trigger an activation of the system.

Rice said that as details emerge on the U.S plan "perhaps there are things the Russians thought might be there that are not there."

She said the United States was willing to discuss these details, adding "there is no reason to assume that there isn't room to continue to refine these proposals" to suit Russian concerns.

Meanwhile, public opinion in Europe has been against installation of a missile defense system. The NIE now argues against one of Washington's main claims that it is necessary.

"Czech newspapers are full of headlines saying there is no longer a need for missile defense," said Tomas Klvana, the Czech government's coordinator for missile defense communication, who is in Washington for talks with administration officials and lawmakers. "It is hard for complex arguments to win against simple headlines."

Klvana says that the potential threat from ballistic missiles aimed at Europe remains whether Iran is pursuing nuclear weapons or not.

That view is shared by the Bush administration.

"The missile threat from Iran continues to progress and to cause us to be very concerned," said U.S. Undersecretary of State John Rood, lead U.S. negotiator on European missile defense issues. "Missile defense would be useful regardless of what kind of payload, whether that be conventional, chemical, biological or nuclear."

Rood said the United States still hopes to have the system online by 2013.