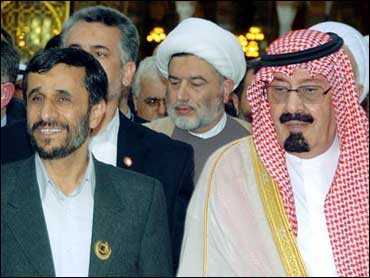 Iran's hard-liner president, who has called for Israel's destruction, said Thursday that the Jewish state should be moved to Europe if the West wants to make up for the Holocaust.

The remarks drew an angry reaction from Israeli officials, Jewish leaders and the United States.

"Unfortunately, this is not the first time that the president of Iran has made outrageous and even racist remarks concerning Jews and Israel," Israeli Foreign Ministry spokesman Mark Regev said.

Speaking to reporters at an Islamic summit in the Muslim holy city of Mecca, Iranian President Mahmoud Ahmadinejad implied that European countries backed the founding of Israel in the Middle East in 1948 out of guilt over the Holocaust.

"Some European countries insist on saying that during World War II, Hitler burned millions of Jews and put them in concentration camps," Ahmadinejad said. "Any historian, commentator or scientist who doubts that is taken to prison or gets condemned."

"Let's give some land to the Zionists in Europe or in Germany or Austria, so they can have their government there," he said. "They faced injustice in Europe, so why do the repercussions fall on the Palestinians? Offer a piece of land from Europe, and we will back this decision and will not attack this government."

"Those who are occupying and ruling Jerusalem, what is the origin of their fathers? ... Most of them have no roots in Palestine, but they are holding the destiny of Palestine in their hands and allow themselves to kill the Palestinian people," he said.

Israel and Iran are sworn enemies and Ahmadinejad's recent remarks saying that Israel should be wiped off the map, combined with Israel's belief that Tehran's nuclear activities are aimed at producing nuclear warheads, have increased tension between the countries.

"Only recently the U.N. General Assembly condemned Holocaust denial and here the Iranian leader is showing himself to be fundamentally contradicting the norms of international behavior and decency," the Israeli Foreign Ministry spokesman said. "I hope that anyone who had illusions about the true nature of the Iranian regime has received these recent remarks as a wake up call."

The United States also denounced the remarks as "appalling and reprehensible."

"They certainly don't inspire hope among any of us in the international community that the government of Iran is prepared to engage as a responsible member of that community, State Department spokesman Adam Ereli said.

He added that Ahmadinejad's comments appear "to be a consistent pattern of rhetoric that is both hostile and out of touch with values that the rest of us in the international community live by."

He said the remarks were especially troubling because of concerns about Iran's nuclear program, which Tehran says is peaceful but the U.S. and others say is aimed at developing atomic weapons.

Ahmadinejad drew sharp international criticism — and even some at home in Iran — when he said in October that Israel is a "disgraceful blot" that should be "wiped off the map." Still, Ahmadinejad, who was elected in June with the backing of Iran's hard-line clerical rulers, stuck by the comments, and his government organized a series of large anti-Israel demonstrations.