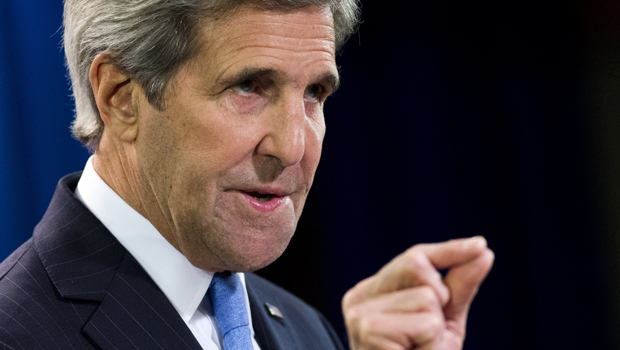 WASHINGTON -- Iran could comply with last summer's nuclear deal as early as Friday or this weekend, officials said, requiring the United States and other nations to immediately suspend billions of dollars' worth of economic sanctions on the Islamic Republic.

Secretary of State John Kerry predicted Wednesday the achievement could happen "within the next coming days."

Kerry also said Iran was in the process of disabling the central vessel, or calandria, for its heavy water reactor at Arak that would have been able to produce plutonium, a pathway to nuclear weapons.

"Just yesterday, the foreign minister (of Iran) reported to me that the calandria of the plutonium nuclear reactor is now out and in the next hours it will be filled with concrete and destroyed," Kerry said Wednesday.

Just hours after welcoming Iran's release of 10 U.S. sailors it detained when their boats wandered on to an Iranian island in the Persian Gulf, Kerry said in a speech at the National Defense University that implementation of the nuclear agreement will take place soon, without specifying an exact date.

Others in Washington and elsewhere told The Associated Press the announcement could come within two days. In Vienna, a senior diplomat from one of the six countries that cut the deal with Iran said it would be formally declared implemented "most probably Friday." Those officials spoke on condition of anonymity because they were not authorized to discuss the matter publicly.

"I believe the parties will perform their undertakings by Friday and Saturday and Sunday and the implementation day would be announced on that time," Araghchi said.

He said the foreign ministers who negotiated the July accord - including Kerry, Zarif and their counterparts from Britain, China, France, Germany and Russia - may meet to deliver a joint statement. Kerry is expected to be in Europe this weekend on other business.

Under the terms of the deal, once Iran meets its obligations to curb its nuclear program, it is to receive wide-ranging sanctions relief. For the U.S. that means suspension of nuclear-related sanctions on Iranian oil, banking and commerce.

Iran was required to ship out most of its stockpile of enriched uranium, a material that can be used for making bombs, and take apart thousands of the centrifuges that enrich the material. Most of the nuclear restrictions last 10 or 15 years.

While Iran accomplished most of the biggest tasks in recent weeks, several technical hiccups remained. Officials had spoken of lingering questions related to Iran's uranium and plutonium programs, including over the properties of certain centrifuges Iran would be permitted to maintain for research purposes.

It's not clear how quickly Iran would reap the benefits of the deal.

Tehran expects to quickly recoup some $100 billion worth of its assets that have been frozen in overseas banks, a tremendous windfall for an economy with a GDP of little more than $400 billion in 2014.

While the Iranians have aggressively courted foreign companies and investors in recent months, it is unclear how quickly contracts can be finalized. Also unknown is how determined major Western firms, in particular, will be given the risk of "snapback" sanctions if Iran violates the deal and the history of U.S. penalties against European banks that have previously conducted business with Iran.