This story was filed by CBS News' George Baghdadi, reporting from Istanbul. 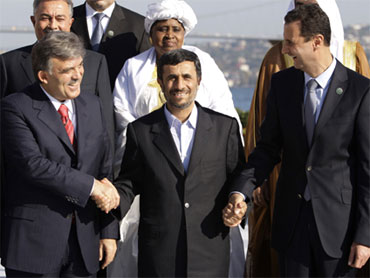 (AP Photo/Ibrahim Usta)
Leaders from 48 Islamic states met Monday in Turkey to begin an economic summit which may see its stated purpose overshadowed by some controversial guests, and the decades-old quest for peace in the Middle East.

The Organization of the Islamic Conference is meant to foment discussion on ways to promote economic and trade cooperation, reduce poverty and speed up recovery plans from the recent global economic jolt. Twenty two of the member nations taking part are classed as underdeveloped states.

The meeting, held at Istanbul's Four Seasons Hotel to mark the 25th birthday of the Committee for Economic and Commercial Cooperation (COMCEC), is being chaired by Turkish President Abdullah Gul.

Gul told attendees that the Arab-Israeli conflict is the basis of all conflicts in the Middle East, stressing the need to find a final solution to this issue and end the Israeli occupation of the occupied Syrian Golan Heights.

The Turkish President underlined the necessity of resolving international disputes through dialogue and diplomacy, boasting that his country's relations with Syria should be an "example" to be followed by other states.

Assad also took part in the opening session, and while affirming his country's dedication to peace in the region, he took a harder line on Israel's occupation of Palestinian territories and the Syrian Golan Heights.

"Events have proven that statements of condemnation and denunciation no longer have any real value unless they are accompanied by practical steps to pressure Israel, instead of courtesy or rewards," Assad told the conference.

"In this context, resistance to occupation is a national duty. Our support to resistance is a moral and legitimate obligation that we should be proud of. This does not contradict, at all, our firm will to achieve a just and comprehensive peace," he added.

"Failure of negotiations in bringing rights back would mean an automatic appearance of resistance as an alternative," Assad suggested.

Assad and Israeli Prime Minister Benjamin Netanyahu will visit Paris this week on different days for talks with French President Nicolas Sarkozy, who is hoping to play a more active role in the Middle East peace process.

Netanyahu will hold talks with Sarkozy on Wednesday while Assad will have a working lunch at the Elysee Palace on Thursday.

The Israeli Prime Minister said recently that he objected to Turkey resuming its role as mediator and does not see how the country can become "an honest broker" between the two sides.

There was no immediate indication that France had any specific proposals to break the deadlock in discussions between the two countries, which broke down at the end of last year over Israel's offensive in the Gaza Strip.

COMCEC, which has a total of 57 member nations, has billed Monday's meeting as an economic summit to discuss trade, but the presence of Ahmadinejad, who could use the summit to combat efforts to isolate the Islamic republic, could also overshadow its economic goals.

Turkey's seemingly growing affinity toward Iran has increased anxiety that the moderate Muslim democracy — an important U.S. ally — is shifting to the East, something its leaders deny.

The International Criminal Court in The Hague, Netherlands, indicted Bashir in March on seven counts of war crimes and crimes against humanity, but stopped short of including a charge of genocide. The United Nations says as many as 300,000 people have been killed since conflict erupted in Darfur in 2003, although Sudan rejects that figure.

COMCEC was established during the Third Islamic Summit Conference held in Mecca, Saudi Arabia, in 1981. It became operational at the Fourth Islamic Summit in 1984 with the election of the president of Turkey as its chairman.