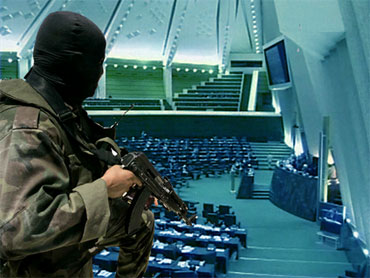 Iran's Parliament passed a law on Sunday earmarking $20 million to support militant groups opposing the West, and to investigate alleged U.S. and British plots against the Islamic Republic.

The legislation is widely seen as a response to Western criticism of Iran's violent crackdown against protesters following the disputed June presidential election. Lawmakers started debating the outline of the bill in August when Iran's hardline leaders were fending off allegations that security forces had tortured opposition activists detained during the demonstrations.

The text of the legislation says the money is to "support progressive currents that resist illegal activities by the governments of the U.S. and Britain." Iranian officials often use such terms to describe militant groups.

It was not immediately clear which groups would receive funding from Iran, but Tehran already backs the Islamic militants Hezbollah in Lebanon and Hamas in the Gaza Strip.

The bill also taps funds to "confront plots and unjust restrictions" by Washington and London against Tehran, and to disclose "human rights abuses by the two countries."

A committee with representatives from Iran's intelligence services, the elite Revolutionary Guards, as well as the Foreign Ministry and the communication and culture ministries will manage the funds.

Iran's constitutional watchdog must still approve the bill before it takes effect.

The move came after the IAEA voted to rebuke Iran over its construction of a second uranium enrichment plant.

On Thursday, the board of the IAEA passed a resolution demanding that Tehran immediately stop building its newly-revealed nuclear facility and freeze uranium enrichment. The IAEA resolution criticized Iran for defying a U.N. Security Council ban on uranium enrichment - the source of both nuclear fuel and the fissile core of warheads.

In today's statement, the Members of Parliament condemned the resolution as a politicized measure that shows the West's double standards.

The statement also called for the return of Iran's nuclear file to the IAEA to the U.N. Security Council.

Parliament Speaker Ali Larijani warned of a downgrade in Iran's cooperation with the Agency. Larijani said Tehran will consider a new plan with its ties with the U.N. agency if the West continues its policies.

The speaker said that Tehran should become more cautious about western offers, this as he described the west's recent nuclear overtures as "political tricks and outdated games."