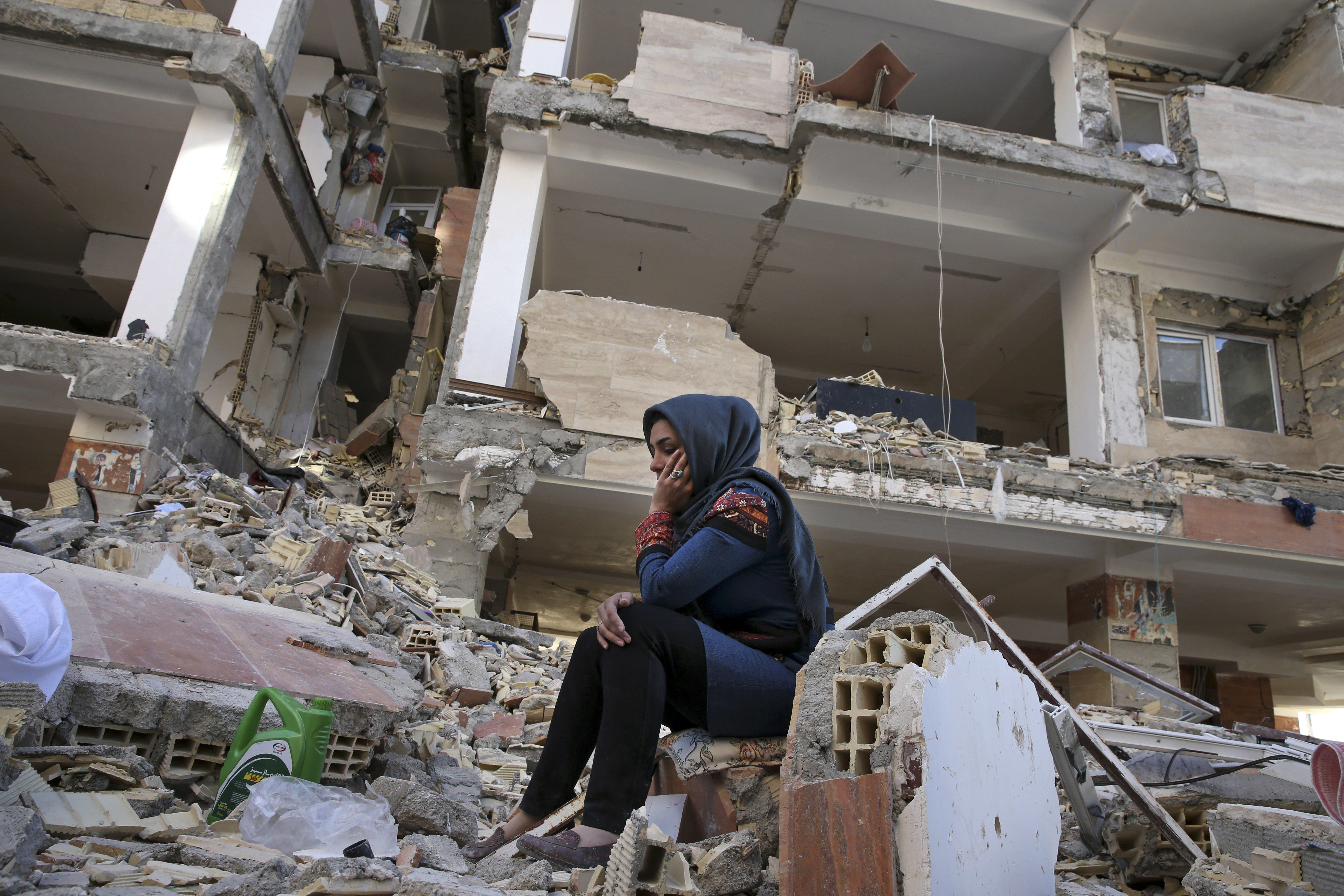 SARPOL-E-ZAHAB, Iran -- Rescuers on Tuesday used backhoes and heavy equipment to dig through the debris of buildings toppled by a powerful earthquake on the border between Iran and Iraq, with weeping women crying out to God as aid workers found new bodies.

Iran's state-run news agency said Tuesday that the death toll in that country alone had risen to 530.

The grim work of recovering the victims began in earnest again at dawn in the Kurdish town of Sarpol-e-Zahab in the western Iranian province of Kermanshah, which appears to be the hardest hit in the magnitude 7.3 earthquake.

Kermanshah, an almost entirely Kurdish province nestled in the Zagros Mountains that run along the border with Iraq, suffered all of Iran's fatalities from the temblor Sunday night that shook 14 of the country's 31 provinces.

Both rescuers and local residents alike stood atop the remains of apartment complexes Tuesday, looking through the rubble. They used heavy blankets to carry away corpses.

The hospital in Sarpol-e-Zahab was heavily damaged, and the army set up field hospitals, although many of the injured were moved to other cities, including Tehran.

The quake also damaged an army garrison and buildings in the border city and killed an unspecified number of soldiers, according to reports.

There are fears more dead could be in the rubble in Sarpol-e-Zahab and other rural villages of Kermanshah province. Mohammad Ali Monshizadeh, a spokesman for the provincial forensic department, said possibly as many as 150 people were buried by family members after the earthquake in remote villages who had not been counted in the official death toll, the semi-official ISNA news agency reported.

Iran's Red Crescent also said it worried about more bodies in rural villages, though it said the rescue operations in larger towns could end soon.

President Hassan Rouhani arrived in Kermanshah province on Tuesday to see the damage for himself and offer his support to those affected.

"This was a pain for all Iranians," Rouhani said, according to a statement on the presidency's website. "Representing the nation of Iran, I offer my condolences to the people of Kermanshah, and tell them that all of us are behind Kermanshah."

Iran's Foreign Minister Mohammad Javad Zarif offered his thanks to foreign countries offering to help but wrote on Twitter: "For now, we are able to manage with our own resources."

Cleric Abdolhossein Moezi, a representative of Supreme Leader Ayatollah Ali Khamenei who also is touring the area, said there was a need for more relief material and "security." That was echoed by Nazar Barani, the mayor of the town of Ezgeleh, who told state TV on Tuesday his constituency still had a "deep need" for food, medicine and tents. He said 80 percent of the buildings in the town had been damaged by the quake.

Many of the heavily damaged complexes in Sarpol-e-Zahab were part of construction projects under former hard-line President Mahmoud Ahmadinejad. The newly homeless slept outside in cold, huddled around makeshift fires for warmth.

The official death toll came from provincial forensic authorities based on death certificates issued. Some reports said unauthorized burials without certification could mean the death toll was actually higher.

The quake was centered about 19 miles (31 kilometers) outside the eastern Iraqi city of Halabja, according to the U.S. Geological Survey, and struck 14.4 miles (23.2 kilometers) below the surface, a somewhat shallow depth that can cause broader damage. The quake caused Dubai's skyscrapers to sway and could be felt 1,060 kilometers (660 miles) away on the Mediterranean coast.

Seven deaths occurred in Iraq and 535 people were injured, all in the country's northern, semiautonomous Kurdish region, according to its Interior Ministry.

The disparity in casualty tolls immediately drew questions from Iranians, especially because so much of the town was new.

Sarpol-e-Zahab fell to the troops of Iraqi dictator Saddam Hussein during his 1980 invasion of Iran, which sparked the eight-year war between the two countries that killed 1 million people. Though clawed back by Iran seven months later, the area remained a war zone that suffered through Saddam's missile attacks and chemical weapons.

After the war, Iran began rebuilding the town. It also was part of Ahmadinejad's low-income housing project, which aided the Holocaust-questioning hard-liner's populist credentials but also saw cheap construction.

Under the plan dubbed as Mehr or "kindness" in Farsi, some 2 million units were built in Iran, including hundreds in Sarpol-e Zahab. Many criticized the plan, warning that the low-quality construction could lead to a disaster.

"Before its 10-year anniversary, Mehr buildings have turned into coffins for its inhabitants," the reformist Fararu news website wrote Monday.

Rouhani himself said the government would launch an investigation into why the state-constructed buildings so easily toppled.

"The faults and shortcomings in the construction of these buildings should be investigated," he said, according to the state-run IRNA news agency. The "government will definitely follow up on these issues and identify the culprits."

Iran sits on many major fault lines and is prone to near-daily quakes. In 2003, a magnitude 6.6 earthquake flattened the historic city of Bam, killing 26,000 people. In 2012, a major casualty earthquake killed over 300.