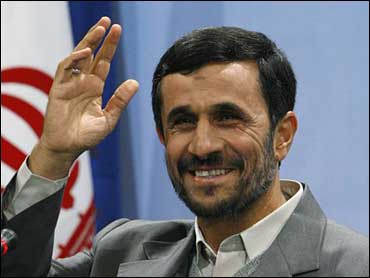 President Mahmoud Ahmadinejad on Tuesday called a U.S. intelligence estimate that concluded Iran stopped developing a nuclear weapons program four years ago a "step forward," and he said more such steps could create an "entirely different" situation between the two countries.

"We consider this measure by the U.S. government a positive step. It is a step forward," Ahmadinejad told a news conference.

"If one or two other steps are taken, the issues we have in front of us will be entirely different and will lose their complexity, and the way will be open for the resolution of basic issues in the region and in dealings between the two sides," he said.

Iran has said its nuclear program is peaceful, but until last week, the United States and Western allies had countered that Iran was hiding plans for a bomb. The latest U.S. intelligence assessment on Iran, however, says Tehran once had a weapons program but shelved it in 2003.

"We announce vehemently that the clerical regime is currently continuing its drive to obtain nuclear weapons," said Mohammad Mohaddessin, a spokesman for the Paris-based National Council of Resistance of Iran, or NCRI.

Mohaddessin told a news conference that Iran appeared to have duped U.S. intelligence into that conclusion.

Mohaddessin said Iran did shut down a Tehran weapons program center known as Lavizan-Shian in 2003 under international pressure and demolished the site. However, Mohaddessin claimed the Iranian authorities shifted their weapons program to other sites, which resumed the work in 2004.

The NCRI is the political wing of the People's Mujahedeen of Iran, an opposition group that advocates the overthrow of government in Tehran. The Mujahedeen have been designated a terrorist group by Iran and by both the United States and the European Union.

It was not possible to independently verify the NCRI claims, which Mohaddessin said came from sources within Iran, including some among staff at covert nuclear plants.

Four years ago, the group disclosed information about two hidden nuclear sites that helped uncover nearly two decades of covert Iranian atomic activity. But much of the information it has presented since then to back up claims that Iran has a secret weapons program has not been publicly verified.

On Tuesday, diplomats from the United States, Russia, China, Britain, France and Germany are to discuss a draft plan for new United Nations sanctions against Iran. If passed by the Security Council, the plan would slap a third round of sanctions on Iran for defying international demands that it halt its enrichment of uranium.