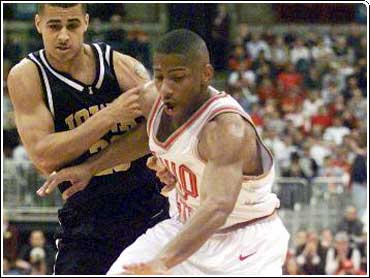 Ohio State waited eight years to take sole possession of first place in the Big Ten. The Buckeyes held it for just 24 hours.

Buckeye-killer Dean Oliver kept Iowa in it until Kyle Galloway nailed a 3-pointer from the right corner with four seconds left as the Hawkeyes upset No. 5 Ohio State 67-64 Wednesday night.

"If a team has a number next to it, we play pretty well," Iowa coach Steve Alford said, explaining the Hawkeyes' victories over nationally ranked Connecticut, Kansas and Ohio State.

The loss dropped Ohio State (16-4, 7-2) into a tie for first place with Michigan State in the Big Ten. The Buckeyes, who were all alone at the top for the first time since 1992 after Purdue beat Michigan State last night, had won eight straight and 12 of 13.

It was the third time this season the Buckeyes lost on a perimeter jumper at the end of a game.

Oliver, who hit a 3-pointer in the final minute a year ago to beat the Buckeyes in Columbus, scored 21 points, while Galloway added 12 and Ryan Luehrsmann had 10. Reserve Rod Thompson grabbed 11 rebounds and contributed big plays on three consecutive possessions down the stretch.

It was Oliver who brought the ball downcourt after Ohio State tied it with 11 seconds left. He split the defense, drew a defender and then flipped the pass to a wide-open Galloway in the right corner.

"I had been having trouble getting the ball because they had been double-teaming me," Oliver said. "But they forgot to duble-team me. I had the ball and I wanted to make something happen. I saw Kyle early and tried to draw a defender get it to him. I knew he'd get it down."

Alford said, "It looked good all the way."

"It was a game of two different halves," Ohio State coach Jim O'Brien said. "We weren't as ready to guard in the first half as in the second."

Trailing 57-47 with four minutes left, the Buckeyes mounted a charge on baskets by Reese and Redd and a free throw by Johnson to cut the lead to five with 2:42 left.

But then Thompson stepped up. After Oliver forced a shot that bounced to the right baseline, Thompson picked off the rebound and hit a 10-foot follow. Penn countered with a jumper, but during a wild scramble near the Hawkeyes' foul line, Thompson picked up a loose ball, pivoted and fired a pass to Galloway, left all alone in the lane because of a double-team, for the layup to make it 61-54 with 1:28 remaining.

Rob Griffin then missed two foul shots for the Hawkeyes, with the Buckeyes hurrying downcourt. They put up three shots before Reese grabbed an offensive rebound and tied the game at 64 with 11 seconds left, leading to the late heroics by Oliver and Galloway.

"I was happy for Galloway," Alford said. "He missed one like that at Indiana and you don't get many second chances."

Galloway's shot also led to a dilemma for the Hawkeyes.

After a timeout with 3.3 seconds left, Ohio State inbounded to near midcourt to Penn who dribbled to the right wing and got off a 3-point attempt that bounced off the front of the rim as the final horn sounded.

Ohio State is 26-3 in Value City Arena, two of the losses to Iowa and the other to Notre Dame all on outside shots at the finish.