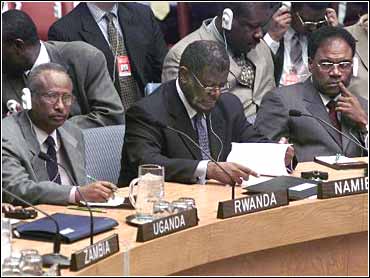 The date is set. The invitations have been delivered. And the recipients all have RSVP'd.

While the combatants in the many-sided war in Congo have embraced a U.N. Security Council blueprint for peace, all sides acknowledge the path to the end of Africa's biggest war is poorly marked and shrouded in uncertainty.

The council outlined the pullback schedule in a resolution adopted Thursday in New York at the close of a two-day conference of the six countries and three rebel groups involved in Congo's two-year war.

"We have come to New York at this time, emboldened by what we see as a window of opportunity, and we want to keep - and widen - that window. (But) there is still much to be done," Namibian Foreign Minister Theo-Ben Gurirab said.

He spoke after the 15-nation council approved a resolution on Thursday calling on all factions in the war to pull back from the front lines during a two-week period beginning March 15, as they have pledged to do during three days of discussions this week at U.N. headquarters in New York.

That would clear the way for some 500 U.N. observers to move in and verify the withdrawal, backed by about 2,500 peacekeeping troops. In the past, the combatants have balked at withdrawals even when they agreed to them.

The meetings and resolution were designed to take advantage of new momentum in bringing peace to Congo and to pressure the various groups to make good on promises to finally implement a 1999 cease-fire agreement.

"This is serious business," said British Ambassador Jeremy Greenstock. The resolution, he said, "is a very important turning point in the international community's whole approach o the disaster of the conflict."

The resolution presses Joseph Kabila, the Democratic Republic of Congo's new president, to move ahead quickly on a promised but long-delayed dialogue with his political foes and the various rebel groups in hopes of national reconciliation and, eventually, free elections.

"This is an important first step," Zimbabwe Foreign Minister Stanislaus Mudenge said after the vote. "Once this has been achieved, we are going to move to the next phase, which is a withdrawal of all foreign forces from the Congo."

Fighting has raged in Congo since 1998, when Rwanda and Uganda, which helped put the late Congo President Laurent Kabila in power in 1997, turned on him and backed rebels trying to topple his government. Zimbabwe, Namibia and Angola then sent troops to bolster the ragged Congolese army.

Throughout the bloody conflict, which has driven tens of thousands from their homes and transformed thousands of children into soldiers, combatants have been plundering Congo's mineral wealth including diamonds, copper, cobalt and gold, with none of the proceeds serving to benefit its citizens.

Previous efforts to end the war have ended in stalemate. But momentum toward peace has picked up sharply following last month's slaying of Laurent Kabila by a bodyguard, which elevated his son Joseph to power.

Joseph Kabila has reversed key policies of his father and authorized the start of a dialogue with political foes while inviting in U.N. peacekeepers without the precondition that foreign forces first leave Congolese territory.

During this week's meetings at U.N. headquarters, cabinet ministers from all six warring nations and top officials of three rebel groups endorsed the council resolution.

The first test of the resolution will come on Feb. 28, when Rwanda has pledged to pull out of the key eastern town of Pweto, which it captured in November.

Then, starting in mid-March, the combatants are to withdraw from the front lines, creating an 18-mile wide buffer zone stretching from southeast Congo to the northwest.

The combatants would then have until May 15 to agree on plans for the complete withdrawal of all foreign forces from Congolese territory.

A key challenge will be Rwanda, which has said it entered the conflict to guard its borders against incursions by ethnic Hutu fighters who fled their country after a 1994 massacre of Tutsis, who now control the government in Rwanda.

Rwanda wants security guarantees along its border before its troops will leave Congo. U.N. officials say the Hutu fighters would have to be disarmed before peacekeepers could be moved into the eastern border areas near Rwanda.