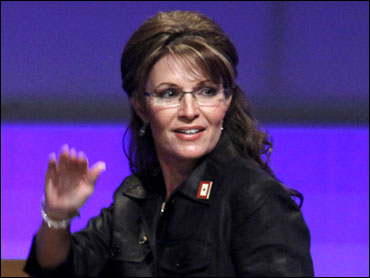 An independent investigator has found evidence that Gov. Sarah Palin may have violated ethics laws by accepting private donations to pay her legal debts, in the latest legal distraction for the former vice presidential candidate as she prepares to leave office this week.

The report obtained by The Associated Press says Palin is securing unwarranted benefits and receiving improper gifts through the Alaska Fund Trust, set up by supporters.

An investigator for the state Personnel Board says in his July 14 report that there is probable cause to believe Palin used or attempted to use her official position for personal gain because she authorized the creation of the trust as the "official" legal defense fund.

The practical effect of the ruling on Palin will be more financial than anything else. The report recommends that Palin refuse to accept payment from the defense fund, and that the complaint be resolved without a formal hearing before the Alaska Personnel Board.

Read the report regarding the ethics complaint

The fund aims to help Palin pay off debts stemming from multiple ethics complaints against her, most of which have been dismissed. Palin says she owes more than $500,000 in legal fees, and she cited the mounting toll of the ethics probes as one of the reasons she is leaving office.

A call seeking comment from her lawyer and an e-mail to her spokeswoman were not immediately returned.

Palin's friends and supporters created the Alaska Fund Trust in April, limiting donations to $150 per person. Organizers declined to say how much it has raised, and had hoped to raise about $500,000. A Web fund-raiser last month brought in about $130,000 in pledges.

In his report, attorney Thomas Daniel said his interpretation of the ethics act is consistent with common sense.

An ordinary citizen facing legal charges is not likely to be able to generate donations to a legal defense fund, he wrote. "In contrast, Governor Palin is able to generate donations because of the fact that she is a public official and a public figure. Were it not for the fact that she is governor and a national political figure, it is unlikely that many citizens would donate money to her legal defense fund."

The ethics complaint was filed by Eagle River resident Kim Chatman shortly after the fund was created, alleging Palin was misusing her official position and accepting improper gifts.

Palin was given a copy of the investigator's report a week ago, Chatman said Tuesday.

"It's an absolute shame that she would continue to keep the Alaska Fund Trust Web site up and running," Chatman told the AP.

At least 19 ethics complaints have been filed against Palin, most of them after she was named the running mate for Republican presidential candidate John McCain. Most of those have been dismissed, and Palin's office usually sends a news release with the announcement.

"She's not acknowledging the fact that the ethics complaint was credible," Chatman said. "When ethics complaints are dismissed, she's quick to publicly respond but this one, she's sitting on."