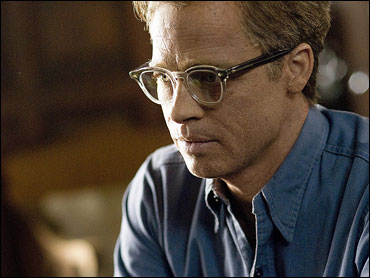 (Paramount Pictures)
Director David Fincher's latest film, "The Curious Case of Benjamin Button," tells the story of a life lived while aging backwards. The tale, adapted from F. Scott Fitzgerald's short story of the same name, begins with a baby born with all of the wrinkles and arthritis of an 80-year-old man and follows his life as he grows into a semi-mobile senior, a middle-aged man and a strapping young adult. Brad Pitt plays Benjamin from the cradle to the grave – with more than a little help from some remarkable technology. Tonight on the Evening News, Katie Couric takes a behind-the-scenes look at how Pitt – er, at least Pitt from the neck up – went from elderly to infant … and everything in-between. Check out the clip below to see Pitt demonstrating some of his, well, acting technique – and read on for an extended portion of our interview.Brad Pitt: This, you know … before, if you were attempting a film like this, you would have to plug in different actors or different ages … to … just to perform the thing. And … it always, I mean, becomes disjointed. Sometimes it connects, sometimes it doesn't. Sometimes the actors kinda look alike. But they seldom have the same kind of personality, or verve, or even dignity.

And in this … we, for the first time, got an opportunity to play the character from childhood to death, from birth to old age, or, in my case, from old age, which was still young, to birth. And, we got to drive the performance all the way. It was an … incredible luxury. It'll become the norm. Right now, it's a luxury.

CBS News: But I understand you're saying that now, but I understand when you read the script, you said, "That's what I want. I want to play it all." And how did you?

Pitt: Well, you have to. Otherwise, you're, you know, you're kind of stepping in for one portion of it … and that can … oh, it just falls short. We, you know, you know the trick. It … doesn't sustain.

Pitt: No, it's, you know, it's David Fincher. David Fincher is, you know, among many things, you know, a great storyteller, which he doesn't get enough credit for. He does get credit for his use of technology, his subversion and perversion of technology. He takes what's there … and uses it to his own evil devices and advances. He advances the field. He asks people to do … kids explain to him what's there, or he understands it. And then he says, "Yes, we can we take it here?" And that's what he does with it …and people go with him. And that's why they like to work with him 'cause … you're taking on something new. You're you're breaking new ground.

CBS: You said you wanted to play the whole thing, and then it happened. What do you feel when you look at it?

Pitt: I think it's incredible. You know, I was excited, you know, we're dealing with an epic love story. I like the fact … that the beginning it read more like a kinda Diane Arbus freak show that would then, you know, morph into this kinda iconic love story. And I was really surprised … how natural it looks, how real it looks, and how seamless it looks. And it's not jarring in any way.

CBS: What's stunning to me was that when you look at it … you're not aware you're looking at a great technological feat that required so much hardware.

Pitt No, you know, we started shooting two years ago. And they've been working on this painstakingly everyday to put this together. And you know what? When … I don't even know. I mean they're dealing with hair follicles, and pores, and pupils dilating, and saliva in the corner of the mouth, and so on and so forth. Hundreds of facial muscles … to, you know, create these … moments.

CBS: But they created it out of you. I know that they started by making plastic casts … of your head.

Pitt: I'll give you … the layman's rundown. First, we do a lot, you know, we did a lot of casts. And then they sculpt the different ages. We figure what point I can play with prosthetics and the point where the … we'll have to go to CG. From there, they had different actors that, playing … Benjamin at different age levels and walking through the scene and playing with the other actors. Meanwhile with me, they're mapping all facial expressions, trying to map all my facial expressions, muscles. We did that for a few days.

CBS: Wait, stop. Stop right there. I wanna stop there 'cause that's the most amazing part. They created the Brad Pitt emotional library. (Laughter) It's called the Volumetric Capture of a Cyber-Scanned Brad. You did different emotions. Can you show us?

And they're trying to map, you know, every possibility that … they can get in the library. Then, of course, we gotta go back. After doing the performance, we had to go back and do it again to find different things, you know, that, twitches and hicks, and things we'd missed.

So then at that point, then after its shot with the other actors, then I see it on screen and we do it. We recreate it with four cameras. I'm playing off of that, and I'm reacting to that. I'm completely free. I thought I'd have to, you know, precisely match head movement. None of that. I'm free to respond accordingly. The body's gonna be the same, so … I can't go against what the body's doing. But that's the only confinement. It's really quite freeing. I'd like to do all films that way.