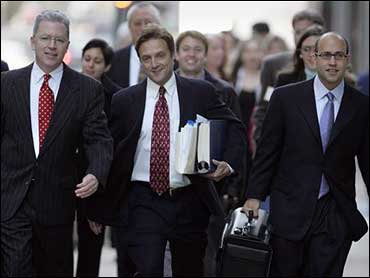 A lawyer for eight families urged a federal judge on Friday to overturn a policy that requires the discussion of "intelligent design" in biology classes, saying it improperly promotes religion in schools.

A lawyer for the school board defended the policy, explaining that it was intended to call attention to a new "science movement."

The families' attorney, Eric Rothschild, said the concept promotes the Bible's view of creation with its belief that evolution cannot fully explain the origin of life or the emergence of highly complex life forms.

Patrick Gillen, a lawyer for the Dover Area School Board, argued that the concept was intended to call attention to "a new, fledgling science movement."

The policy requires students to hear a statement about intelligent design before ninth-grade biology lessons on evolution.

The statement says Charles Darwin's theory is "not a fact," has inexplicable "gaps," and refers students to a textbook for more information.

Eight families are suing to end the practice, saying it violates the constitutional separation of church and state.

The lawyers wrapped up a six-week trial that featured expert witnesses for each side debating intelligent design's scientific merits. Other witnesses clashed over whether creationism was discussed in school board meetings months before the curriculum changed in 2004.

Even if Jones decided the intelligent design theory isn't religion-based, he could keep it out of Dover, Pennsylvania classrooms by ruling that the board there acted with religious motives, reports CBS News correspondent Barry Bagnato.

Minnich said under cross-examination that intelligent design articles are not found in the major peer-reviewed scientific journals because it is a minority view.

"To endorse intelligent design comes with risk because it's a position against the consensus. Science is not a democratic process," he said.

The plaintiffs are represented by the American Civil Liberties Union and Americans United for Separation of Church and State. The school district is being represented by the Ann Arbor, Mich.-based Thomas More Law Center, which says that its mission is to defend the religious freedom of Christians.