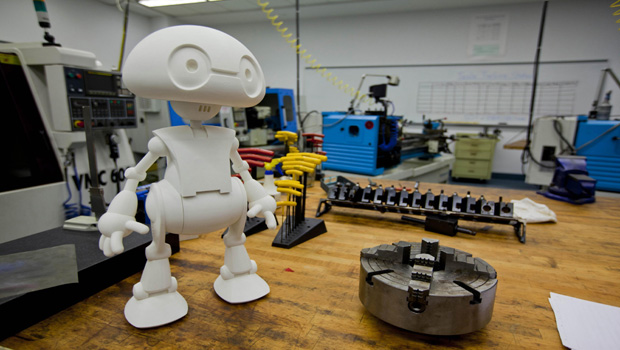 Could a hobbyist one day build a walking, talking humanoid robot from a kit -- same as airplane models and ships in a bottle? Intel hopes to offer that option to robot enthusiasts everywhere by the end of the year.

The company debuted a fully customizable, 3D-printable robot at the Re/code Code Conference on Wednesday. The brainchild of its resident futurist, Brian David Johnson, the aptly-named "21st Century Robot" project is the result of the collaboration of developers from the University of Southern California, the Franklin W. Olin College of Engineering, and Trossen Robotics, according to the project's website, 21stCenturyRobot.com.

Intel CEO Brian Krzanich walked across the stage, accompanied by Jimmy the Research Robot. The two-foot-tall, white, humanoid robot can be programmed to sing, dance and tweet, he said. It's powered by a low-cost processor. Consumers will be able to purchase the kit for about $1,600.

In the launch video, developers talk about making robotics more social. The Intel-based robots will have the computing power to do social interactions with humans, such as voice and speech recognition. Built with the Intel Core i5 processor, it also has other features, including USB 3.0, Bluetooth and WiFi. However, Re/code notes that a robot with i5 processor would cost closer to $16,000. So consumer models will run on Intel Edison, a low-cost chip that is used to create wearables and other products for the Internet of Things.

The hardware designs will be available through an open-source platform, allowing anyone with access to a 3D printer to make and create basic parts. Essential parts that can't be printed, such as motors, wires, battery and processors, will be available to consumers in a kit that can be purchased on the project's website, according to Re/code.

The robot's programming will also be open-sourced. Intel says developers will be able to create their own apps and consumers will also be able to download whatever software they wanted to run on their robot.

Intel hopes that a mass availability of robots will spur lower prices for the kits -- less than $1,000 -- over the next few years.

However, what may spur mass availability of a build-a-robot kit is a cheaper 3D printer; many 3D printers are currently priced at $1,000 or more. A separate presentation had that idea in mind when entrepreneur Bill Gross announced the launch of an Indiegogo campaign for the development of the MOD-t, a $200 end-to-end 3D printing solution, which the company could put 3D printers in the average consumer's hands by 2015, reported Mashable.