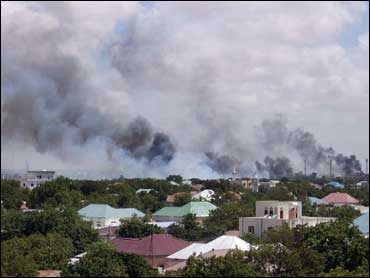 A helicopter bombing insurgent positions in Somalia's capital was shot down Friday as government and allied troops battled hundreds of gunmen in the streets, a witness said.

Government soldiers and troops from neighboring Ethiopia, who are in Somalia to protect the fragile government, were under severe attack for a second day as they tried to quash a growing insurgency by Islamic militants. "The helicopter looked like a ball of smoke and fire before crashing," said Ruqiya Shafi Muhyadin, who watched as the helicopter went down in a residential area near the airport.

Witnesses have reported seeing the bodies of soldiers dragged through the streets of Mogadishu for days.

The military operation which began Thursday was meant to be a three-day push to restore order in Mogadishu, as the Ethiopian contingent prepares to withdraw from the country.

The capital has been under near daily attack from Islamic insurgents, said Mohamed Mohamud Husein, spokesman for the Somali president.
"The operation will take at most three days, and it's aimed at rooting the terrorists out of the city," he said Thursday.

In Addis Ababa, Ethiopian Prime Minister Meles Zenawi said Thursday his country had successfully accomplished its mission in Somalia. He said extremists were no longer a "clear and present danger" to Ethiopia.

"After breaking the backbones of extremist forces, our defense forces have started to withdraw," Meles told his country's parliament. He said "more than two-thirds" of his forces have returned to Ethiopia, but gave no figures.

Meles added that his government would continue to train Somali security forces.

Somalia has seen little more than anarchy for more than a decade. The government, with crucial support from Ethiopian troops, only months ago toppled an Islamic militia that had controlled Mogadishu.

Insurgents believed to be the remnants of Somalia's Council of Islamic Courts have staged almost daily attacks against the government, its armed forces and the Ethiopian military. Last week, a cargo plane carrying equipment for African Union peacekeepers here was shot down by a missile during takeoff, killing the 11-person crew.

The United States — which has been involved in the fighting militarily at times, particularly in the south of Somalia which was the rebel's stronghold — has accused the Islamic group of having ties to al Qaeda.

The U.N.'s refugee agency said 57,000 people have fled violence in the Somali capital since the beginning of February, including more than 10,000 people who fled the city in the last week.

The figures were based on information provided by non-governmental organizations in Somalia, the U.N. High Commissioner for Refugees said in a statement released late Wednesday.

"There has been a steady exodus from the city since the beginning of February, when armed groups clashed with forces of" the government, the agency said.