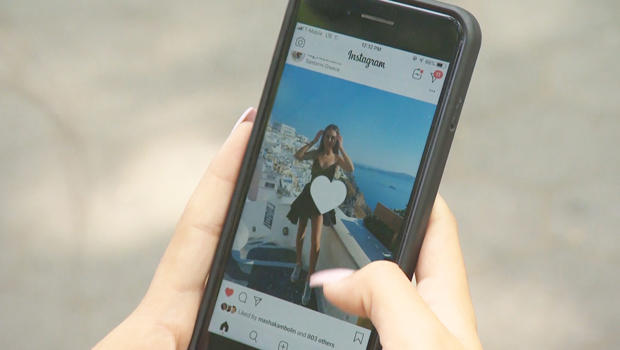 Many people live for the "likes" on social media. But making good on a pledge he made on "CBS This Morning" last June, Instagram head Adam Mosseri is changing the way millions of users interact with the app, by making "like" counts private.

Instagram has been testing the hidden likes feature for months in Canada, Australia, New Zealand, Ireland, Italy, Brazil and Japan. Starting this week, the company is expanding the test to parts of the U.S.

When asked by Gayle King if he were worried or concerned that the move would hurt his platform, Mosseri replied, "a little."

"We don't want Instagram to be such a competition. We want it to be a place where people spend more of their energy connecting with the people that they love and the things that they care about," he said.

Friends can still press that little heart, but only the user who posted the pic will be able to feel the love.

"This is healthy for users, because it does eliminate some of that tension around sharing, and measuring your self-worth against how many likes you get on a picture," said tech writer Taylor Lorenz.

In a tweet sent out by Mosseri last Friday, he announced the feature was hitting stateside, adding, "Looking forward to the feedback."

And feedback is already coming.

Instagram influencer Kim Kardashian West agrees the move will be "beneficial" for people's mental health. But hip hop artist Cardi B feels the problem isn't the likes but the comments. She made her voice heard on Instagram, even though she didn't want to show her face:

She said users who respond to comments on posts rather than the posts themselves are "starting the craziest arguments, been starting to race-bait, all because of comments … They want to get the most reaction. The comments affect more than the likes."

Nicki Minaj vows to no longer use the platform. She says, among other things, removing likes takes away power from independent artists to show how well their work is being received by fans.

Lorenz told correspondent Jonathan Vigliotti, "I think people are freaking out about the removal of likes because it seems so core to the Instagram experience."

Lorenz believes the binary response – "like" or "dislike" – is already outdated.

Mosseri agrees. "We will do things that mean people use Instagram less if we think that they keep people safe or generally create a healthier environment. And I think we have to be willing to do that," he said.

"Instagram's new CEO has spoken a lot about his goals to reduce bullying and foster a healthy community," Lorenz said, "and I think this is definitely in line with those efforts. That's ultimately good for business."

Another concern being voiced is that eliminating likes will be the end of Instagram influencers – users who profit off of having a huge fanbase.

Lorenz disagrees. She says Instagram has other analytic tools to share with influencers, and losing likes won't change the type of engagement they've already seen.