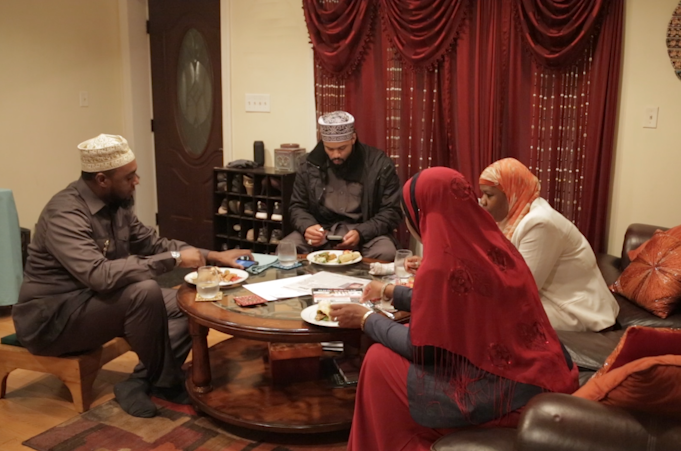 At dusk, the murky summer rainfall made it difficult to navigate the winding rural roads that lead to the small village of Islamberg in Hancock, New York.

"Our Sheikh named it Islamberg," said Hussein Adams, chief executive of the Muslims of America, a national network dedicated to promoting an understanding of Islam.

"Even in the name 'Islamberg' - an Islamic village where Islam is practiced - we don't hide our beliefs," said Hussein, driving past the community's "Welcome to Islamberg" sign.

"This is who we are. And we're proud about it."

Holy Islamberg, as residents refer to it, is the headquarters of the Muslims of America organization, as well as home to about two dozen Muslim families, mostly African-American. Men wear prayer caps while women wear hijab, and everyone, including the children, dresses modestly. Islamberg is the picture of a traditional and tranquil Islamic community - not of immigrants, but of mostly second- or third-generation Americans hailing from cities like New York.

It was set up 32 years ago by a Pakistani Sufi cleric named El Sheikh Syed Mubarik Ali Shah Gilani. Sheikh Gilani was the man who Wall Street Journal reporter Daniel Pearl was on his way to meet when he was kidnapped in Karachi, Pakistan in early 2002. At the time, Gilani was not listed in the United States report on terrorism. He was interrogated and subsequently released. In a 2002 interview with 60 Minutes, Gilani said that his followers are not anti-American, and that Muslims are better off in America than anywhere else.

"Daily life is very exciting. We have a lot of children; we have a lot of professionals that go out, just like any other American citizens, to and from work places," said Adams. "We are very fortunate to live our lifestyle and practice our religion freely within the United States. We have actually been protected because of the freedoms that the United States affords to Muslims."

No one in Islamberg seems to take these freedoms for granted, however, given the negative attention foisted upon the community by certain right-wing groups who have claimed over the years that the village is in fact a breeding ground for Islamic extremism and terrorism.

However, law enforcement officials in direct contact with the residents of Islamberg say that's not the case.

"I think there is a lot of misinformation that is out there, certainly on the Internet," said Capt. James Barnes from the New York State Police Bureau of Criminal Investigation. Barnes told CBS News that he's had a personal relationship with the community of Islamberg for 12 years.

"I go back to the numerous time that the state police has been invited to their lands, and again, I don't know any other place where, if something nefarious is occurring that they would willingly invite law enforcement personnel to come in and have lunch with them and interact with them on a frequent basis," said Barnes. "I would say that the amount of crime that is associated there at the land is less than it is anywhere else."

In a case that underscores how dangerous this atmosphere of suspicion can be, a one-time Congressional candidate from Tennessee, Robert Doggart, faces charges in connection with an alleged plot to attack Islamberg. In wire-tapped phone calls and meetings with FBI informants, Doggart allegedly said that he planned to take an assault rifle, armor-piercing ammunition and other weapons, including a machete, to destroy Islamberg. The criminal affidavit indicates that Doggart allegedly met with members of a private militia in Texas and South Carolina. He is quoted as saying: "If it gets down to the machete, we will cut them to shreds."

Doggart was arrested in April 2015 and signed an agreement under which he would enter a guilty plea to a single charge of "interstate communication of a threat," though a judge threw out the plea agreement. He still faces federal prosecution and has been subject to home confinement after posting $30,000 bail.

Doggart appeared in court in Chattanooga, Tennessee, for his arraignment on July 13. Members of the Muslims of America, including several residents of Islamberg staged a rally in front of the courthouse, demanding that he be charged with terrorism and hate crimes. Supporters joined in with chants like: "He is a terrorist! Just like ISIS! He tried to burn our school down! Just like the Taliban!" as others held signs that read "American Taliban" above Doggart's image.

Tahirah Clark, lawyer for Muslims of America, said that she hoped to stop what she called a "double standard" from unfolding.

"This particular defendant, Robert Doggart, seems to have been treated a little differently than others in this country who have been apprehended for similar acts - especially if they are African American or Muslim," said Clark. She explained how, with the help of outside organizations, Islamberg residents hope to get the attention of the American public and the American government - so that "things will change ... and the residents of Islamberg, and the children of Islamberg will receive justice."

"To hear that there is someone out there who plotted to completely annihilate our community is just unbelievable, and it's really difficult to put it into words what we have - what our community and our children have experienced," said Clark.

Several residents of Islamberg expressed frustration at the lack of national attention that Doggart's case has received relative to other domestic terror plots.

"In the midst of all of this where is Fox News? Where is CNN? Where are all these major - if sides were turned and this was a Muslim attacking a Christian village --- you know what it would be," said Adams.

On a recent evening the week before Doggart's arraignment, Adams, Smith, Clark, and Faruq Baqi, the Muslims of America spokesperson, gathered in Smith's house discussed their ideas about the true nature of Islam and their place in the U.S.

Across the room from where they sat, a makeshift buffet-style layout of dishes boasted everything from fruit skewers and cream-cheese filled dates to hummus, crackers and fish. It was almost time for Iftar, one of the religious observances of Ramadan, when community members come together to break their fast.

"This is our country."