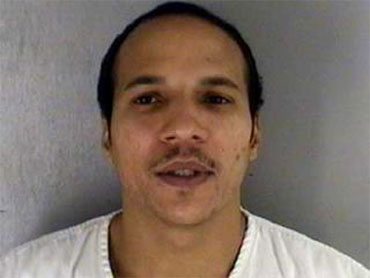 Authorities say an inmate shot a deputy and stabbed another in a holding cell at a northern Virginia courthouse.

Fauquier County sheriff's Lt. James Hartman says 30-year-old George Golder Phillips of Warrenton shot one deputy in the leg, and stabbed the other in the face around 1 p.m. Wednesday.

Phillips is suspected of robbing three banks in Warrenton, Va. and several others in neighboring areas. He was taken to the Fauquier County courthouse for a hearing Wednesday afternoon.

The courthouse is in Warrenton, on the outer edge of the Washington, D.C. metro area, south and west of the city.

Deputy County Administrator Catherine Heritage says the deputies were taken to hospitals in serious but stable condition. The deputy who was shot was taken to a trauma center reports CBS News affiliate WUSA in Washington.

Hartman says the inmate took the gun from one of the deputies, but it's not clear what he used to inflict the stab wound.