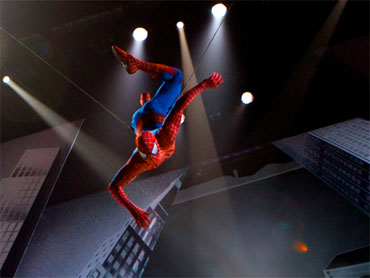 The $65 million production of "Spiderman: Turn Off the Dark" has made headlines as the most expensive -- and perhaps one of the most dangerous Broadway musicals ever as it prepares for its scheduled Feb. 7 opening.

One of its most recent setbacks was stuntman Christopher Tierney's horrifying 30-foot fall earlier this month, resulting in injuries that included a skull fracture, cracked vertebrae and four broken ribs.

Tierney was the fourth person involved with the show to sustain significant injuries.

But now, reports CBS News Correspondent Elaine Quijano, he is out of the Intensive Care Unit of a New York Hospital, though he's in a full-torso brace after recovering from back surgery.

Isabel Keating, a fellow cast member and friend, told CBS News Tierney "has his enormous spirit pouring out of him. I haven't seen him. But I hear that he's doing great and he's walking."

Other cast members call Tierney a fearless actor who embodies the spirit of "Spider-man" for them. He's headed for rehab and says he can't wait to return to the musical

But in another blow to the show, lead actress Natalie Mendoza quit after returning from a concussion suffered in an accident last month.

With its high-flying, breathtaking stunts, the show has been allowed to continue by local officials after instituting strict new safety measures.

Yet, the negative press hasn't hurt ticket sales. Theatergoers are still packing in for sold-out previews in the run up to Opening Night.

One woman who saw "Spider-Man" says, "I love the heater. … This is the best thing I've seen in years, if not forever."