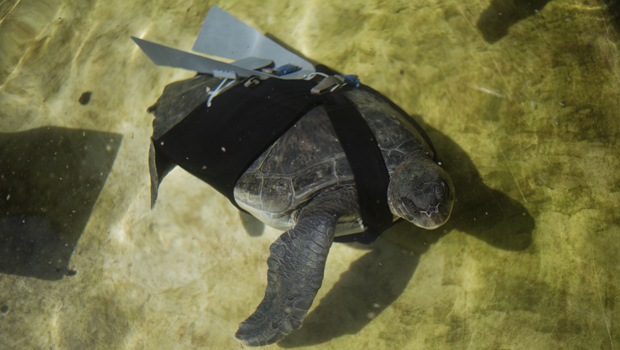 MICHMORET, Israel -- A badly injured sea turtle's prospects are looking up - thanks to a new prosthetic fin designed by an Israeli team and modeled after the wings of a U.S. fighter jet.

The green sea turtle, named "Hofesh," the Hebrew word for "freedom," was caught in a fishing net off Israel's Mediterranean coast in early 2009. With his two left flippers badly wounded, rescuers had to amputate, leaving him with a pair of stumps that made it difficult to swim.

Yaniv Levy, director of Israel's Sea Turtle Rescue Center, said Hofesh was initially fitted with a diver's fin, but it provided little relief and he bumped into things as he tried to swim.

Shlomi Gez, an industrial design student at Jerusalem's Hadassah College, read about the animal on the Internet and wanted to help. He designed a prosthetic based on a fish's dorsal fin. The contraption provided some improvement, but Hofesh still had trouble breathing and rising to the surface.

Then, inspired by the design of Lockheed Martin Corp.'s F-22 Raptor warplane, Gez designed a new prosthetic with two fins. The device, somewhat resembling the aircraft's wings, was strapped onto Hofesh's back on Thursday, allowing him to move easily around his tank.

"I discovered it worked better than one fin on the back," Gez explained. "With two fins, he keeps relatively balanced, even above the water."

Levy said that Hofesh will never be able to return to the wild.

But he shares a tank with a blind female turtle named Tsurit, and researchers are optimistic the pair will mate, potentially adding to the local population of the endangered green sea turtles. He said it is difficult to say exactly how old the two turtles are, but they are estimated to be between the ages of 20 and 25, and approaching the age of sexual maturity.

"We have great plans for this guy," Levy said.

"They will never go back to the wild, but their offspring will be released the minute they hatch and go immediately into the sea and live normally in the wild," he added.