Via Calculated Risk, here's a graph of the 4-week moving average of weekly claims for the last 40 years: 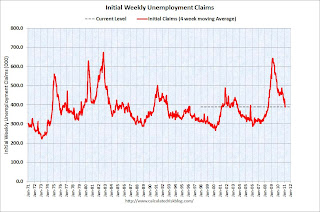 Click on graph for larger image in graph gallery.
The average is now 388,500, a decrease from last week's figure. This puts claims into the range where jobs are being created rather than lost (the cutoff is roughly 400,000, see here).

However, while this is good news, we should keep it in perspective. The employment "barrel" is now far less than full due to the recession, we've lost millions of jobs, and we are just beginning to add jobs to the barrel once again. But, unfortunately, we're still a long way from having the employment barrel be full again. And as population grows, the size of the barrel increases and this makes it even harder to refill the jobs barrel. That is, to keep the employment level from falling even further as the barrel size increases from natural population growth, we have to fill the barrel up with new jobs faster than its size is expanding. Right now we are putting more into the barrel, but we are not yet doing so at a rate fast enough to keep to refill the barrel.