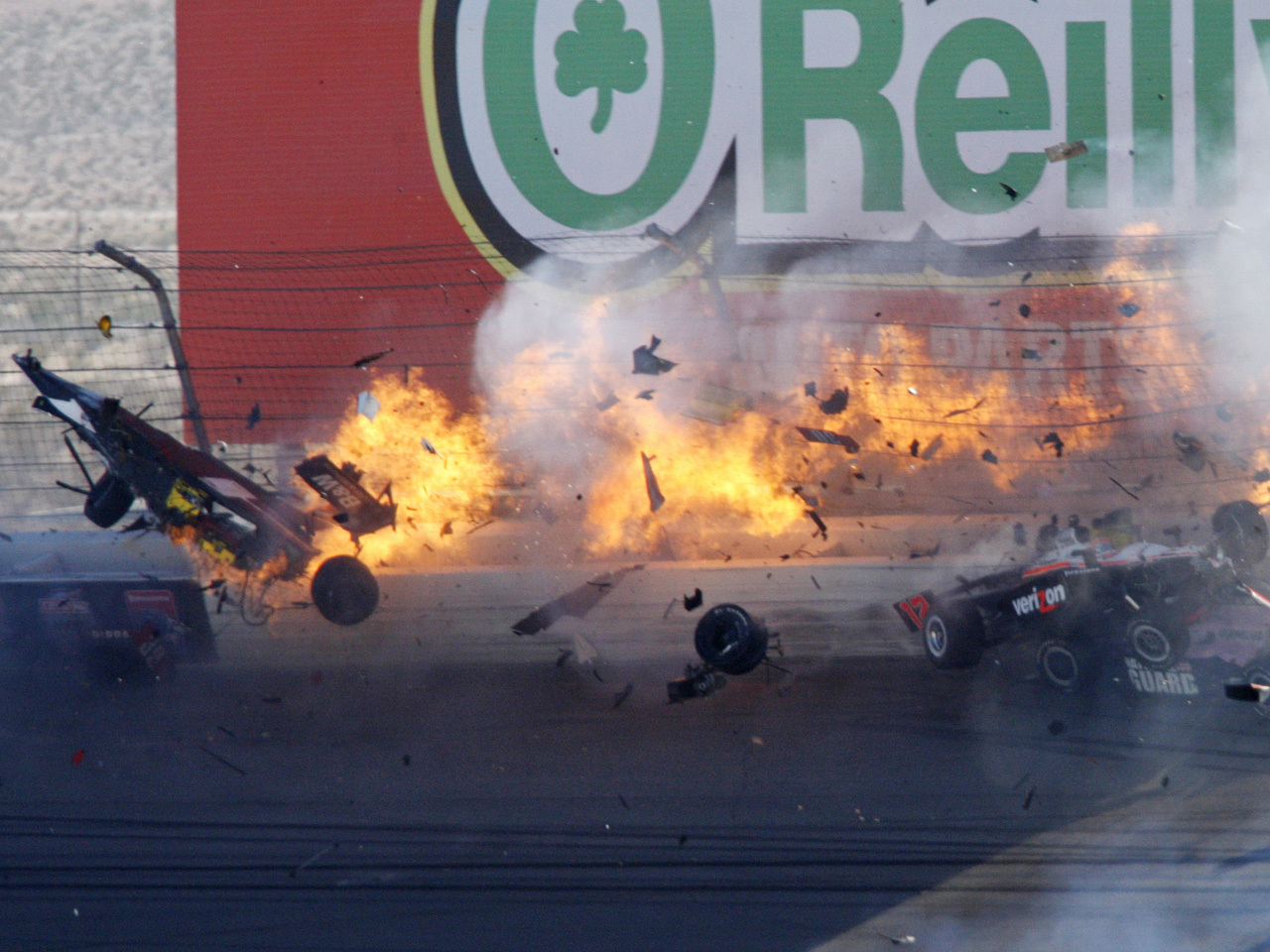 A journalist covering Sunday's Las Vegas Indy 300 race at which driver Dan Wheldon was killed in a massive 15-car wreck said conditions in the race were such that "Everybody kind of expected that there was going to be at least one or two really big crashes."

Just minutes after the Las Vegas 300 began, Dan Wheldon - driving car no. 77 - went airborne and crashed into a fence. In all, 15 cars were involved in a massive pileup that one driver described as looking like a scene from "The Terminator."

Wheldon was airlifted from the track to a local hospital. A short time later, IndyCar CEO Randy Bernard announced Wheldon had passed away from "unsurvivable injuries."

CBS News correspondent Bill Whitaker reports it was IndyCar's first fatality since 2006, when Paul Dana was killed during a crash in Miami, at a race Wheldon later won.

In a preview of this weekend's race that Wheldon blogged for USA TODAY Sports and was posted yesterday, he wrote, "As long as I can find some speed and keep up with the pack, I'll do everything I can to put on a show."

Wheldon was racing Sunday for team owner Sam Schmidt, whose own Indy driving career was cut short in a horrific crash that left him a quadriplegic.

During earlier practice runs, some drivers had expressed concern about the track at speeds approaching 225 m.p.h.

"We all had a bad feeling about this place, in particular just because of the high banking and how easy it was to go flat," driver Oriol Servia said. "We knew it could happen, but it's just really sad."

Sports Illustrated writer Bruce Martin, who was covering the race and witnessed the fatal accident, told CBS' "The Early Show" that before yesterday's competition, there was concern among the drivers about the race.

"There was total concern about everything," Martin said. "Not so much the track, the track really didn't do anything wrong, as much as it was the style of race cars that you have in the Izod IndyCar. On a high bank speedway, they're able to go flat - that means flat to the floor with the accelerator - and by doing that, there was no separation of the field. So you had a pack of 34 cars all racing in one large group. At a lot of the other ovals you have a little bit of separation. They start 33 cars at the Indianapolis 500 - that's a two-and-half-mile flat oval. There's a lot of time for the cars to separate, for the good cars to get away from the slower cars.

"Here, all of the cars were able to run pretty much the same speed, which created a giant pack. There were times early in the race where they almost went four-wide.

"Remember one thing: The crash started at just 11 laps in what was a 200-lap race. It was far too early for something that serious, but everybody kind of expected that there was going to be at least one or two really big crashes in this race."

"And considering these cars were going over 222 miles an hour, that basically gives these drivers hardly any time to react when another car crashes, and that's exactly what you saw Sunday. As soon as the first couple of cars crashed, the other cars further back, they had nowhere to go. They all drove into it."

"We lost a good friend," said Dario Franchitti. "I think everyone in IndyCar considered Dan a friend."

Danica Patrick, who was making her final IndyCar start tweeted: "There are no words for today. Myself and so many others are devastated."

In 2008 Wheldon took CBS News' Russ Mitchell for a ride in an Indy car, and described what it's like being behind the wheel when you're going more than 200 miles an hour: "When you're driving one of these Indy cars, things happen so quickly, you've got to be very patient and - not slow to react, but very, very gentle."

Dan Wheldon, who was 33, leaves behind his wife Suzi and two young sons. He was 33.

When asked how the two-time Indy 500 winner will be remembered, Bruce Martin said, "His legacy is going to be how well-liked, how well-loved he really was by the fans, by his fellow competitors. He was really a tremendous ambassador for the sport of IndyCar racing."