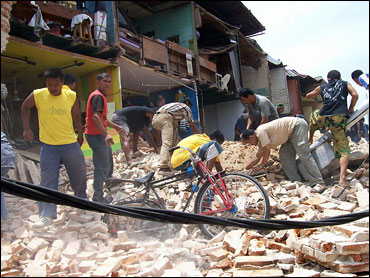 A powerful earthquake jolted western Indonesia on Tuesday, killing at least 70 people and injuring hundreds as they fled shaking buildings, crumpled homes and hospitals, authorities said. Two school children were crushed by debris on a playground.

The 6.3-magnitude quake struck on Sumatra island just before 11 a.m. and was felt as far away as neighboring Malaysia and Singapore, where some tall buildings were evacuated. Several aftershocks followed, the strongest measuring 6.1, adding to fears of people already too nervous to return indoors.

Many said they would sleep in front of their homes or in the hills Tuesday night.

"Women were crying out in terror. We all just fled as quickly as we could," said Alpion, a welder who joined thousands of others running to higher ground, fearing a tsunami that never came.

Indonesia straddles one of the world's most seismically violent zones and has been hit by a string of natural disasters in recent years, the most deadly being the 2004 Asian tsunami that killed 160,000 people on Sumatra's northern tip.

At least 70 people were killed by the quake, which hit the island's western coast, Cabinet Secretary Sudi Silalahi told reporters in the capital, Jakarta.

The worst-affected area appeared to be Solok, a bustling town close to the epicenter where two children were killed when a two-story building collapsed on the school playground, said police spokesman Supriadi, who like many Indonesians uses only one name. Three family members were burned alive when their collapsed home burst into flames.

Dozens of buildings were destroyed and hundreds others damaged, according to local police chief Lt. Col. Budi Sarwono. TV footage showed a flattened three-story home and thick cracks in the road.

"My house is on the brink of collapse," said Imelda Kusmawati, as she prepared to spend the night in an army tent with her two children and six other families. "I am still traumatized and worried about aftershocks."

Patients poured into hospitals, many of them with broken bones and cuts, but most were treated outside because of fears of more quakes. Scores were laid out on cots on a soccer field, where they were attached to intravenous drips and given emergency care.

"So far we have recovered 19 bodies and hundreds of injured people," Sarwono said. "The two hospitals are overwhelmed."

A witness in the town of Payahkumbuh said several shops in the main street had collapsed and police and soldiers were digging for survivors. Electricity remained cut in parts of the nearby seaside town of Padang as darkness fell hours later.

Local government spokesman Hasrul Piliang said the number of dead "would likely rise" because tolls from remote areas were still being collected and there were reports of others trapped under debris.

U.S. earthquake expert Kerry Sieh was in Padang on a research trip when the quake struck. He fled his fourth-story hotel room like other guests, stopping only to unplug his laptop.

"I was pretty scared," he said, adding that the fault that spawned the quake was known as the Great Sumatran, which last ruptured in 1945. "I now know why people have a hard time remembering how long earthquakes last for."

Indonesia, the world's largest archipelago, is prone to seismic upheaval because of its location on the so-called Pacific "Ring of Fire," an arc of volcanoes and fault lines encircling the Pacific Basin.

In addition to the 2004 tsunami, an earthquake killed nearly 5,000 on Java island last year.

In December 2004, an earthquake off Sumatra island spawned the tsunami which killed more than 160,000 people in Indonesia – more than in any of the 11 other nations affected by the disaster, which all together saw more than 230,000 people perish.

Life has not returned to normal in Sumatra, where about 70,000 people affected by the tsunami are still living in housing meant to be temporary.

Tuesday's quake was about 660 miles west of the country's capital, Jakarta.