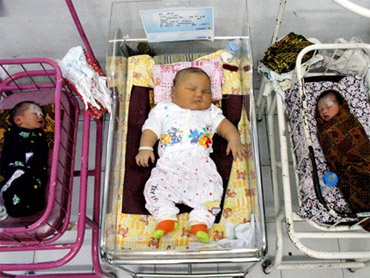 Indonesia's heaviest-ever newborn drew curious crowds Friday to a hospital where the boy named Akbar - or the Great in Arabic - came into the world at a record 19.2 pounds.

Akbar Risuddin was born to a diabetic mother in a 40-minute cesarean delivery that was complicated because of his unusual weight and size, Dr. Binsar Sitanggang said.

"I'm very happy that my baby and his mother are in good health," father Muhammad Hasanuddin said Friday. "I hope I can afford to feed the baby enough, because he needs more milk than other babies."

Crowds pushed to get a peek of the extraordinary boy, who measured nearly 24 inches when he was born Monday, at the Abdul Manan hospital in the northern town of Kisaran on the island of Sumatra.

"This is fantastic," Dewi Miranti, a mother from a nearby village, said as she peered through a window with about a hundred other people. "He looks very well and is cute."

The baby's extreme weight was the result of excessive glucose from his mother during pregnancy, Dr. Sitanggang said.

"He is greedy and has a strong appetite, nursing almost nonstop," the doctor said.

The boy was the third child of Hasanuddin, 50, and mother Ani, 41, who like many Indonesians goes by a single name. His two "little" brothers weighed 11.6 pounds and 9.9 pounds at birth.

The former Indonesian record holder was a 14.7-pound baby boy born on the outskirts of the capital, Jakarta, in 2007.

Tiny radioactive capsule found after search of vast swath of Australia
Thanks for reading CBS NEWS.
Create your free account or log in
for more features.
View CBS News In
CBS News App Open
Chrome Safari Continue
Be the first to know
Get browser notifications for breaking news, live events, and exclusive reporting.