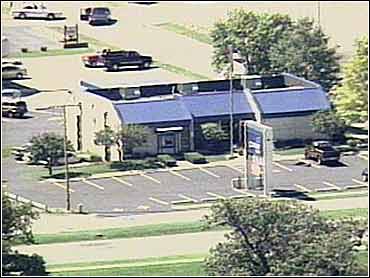 Broadcast reports say the hostage situation is over at a bank in Lowell, Ind. - and the gunman is in custody. Police said the siege came to what they call a "very peaceful" end, with nobody hurt.

A group of hostages were taken Tuesday morning during a robbery at a bank on the east side of this small rural town, police said. Two adults and a child had been released by mid-morning.

Lowell is located in northwest Indiana, about 40 miles south of Chicago. The bank is on the edge of town in a commercial strip area along Indiana 2. Lowell is a rural town of about 7,500 people in southern Lake County in a largely agricultural area.

Police initially reported the number of hostages at nine, but there were news reports putting the number as high as 20. Authorities negotiated with the gunman for the release of the three hostages, Deputy Lake County police chief Melvin Maxwell said.

The three people were escorted from the bank, two initially and then a third after authorities dropped a large bag at the door.

The situation began at about 9 a.m. CDT.

FBI agent Doug Garrison said there was one armed white male in the bank. Town officials said the man was trying to rob the bank, but investigators weren't sure why the hostages were taken.

Lowell Senior High School, located about 300 yards southwest of the bank, was placed under a lockdown by school officials after police told them of the nearby hostage situation.

"We're just kind of sitting tight here," said town administrator Rick Dal Corobbo. "We were told not to be really moving around, cause the city is in chaos."

Donald Yeoman, superintendent of the Tri-Creek School Corporation, said classes were continuing for the school's 1,050 students, but that students were barred from leaving the building and there were no outdoor activities.

"All the doors are locked and we have employees at every door," Yeoman said, adding that outside the school he could see "lots of police officers, that's all I can see."

Also, two restaurants near the bank were evacuated by police. A Pizza Hut was taken over and turned into a police command post.