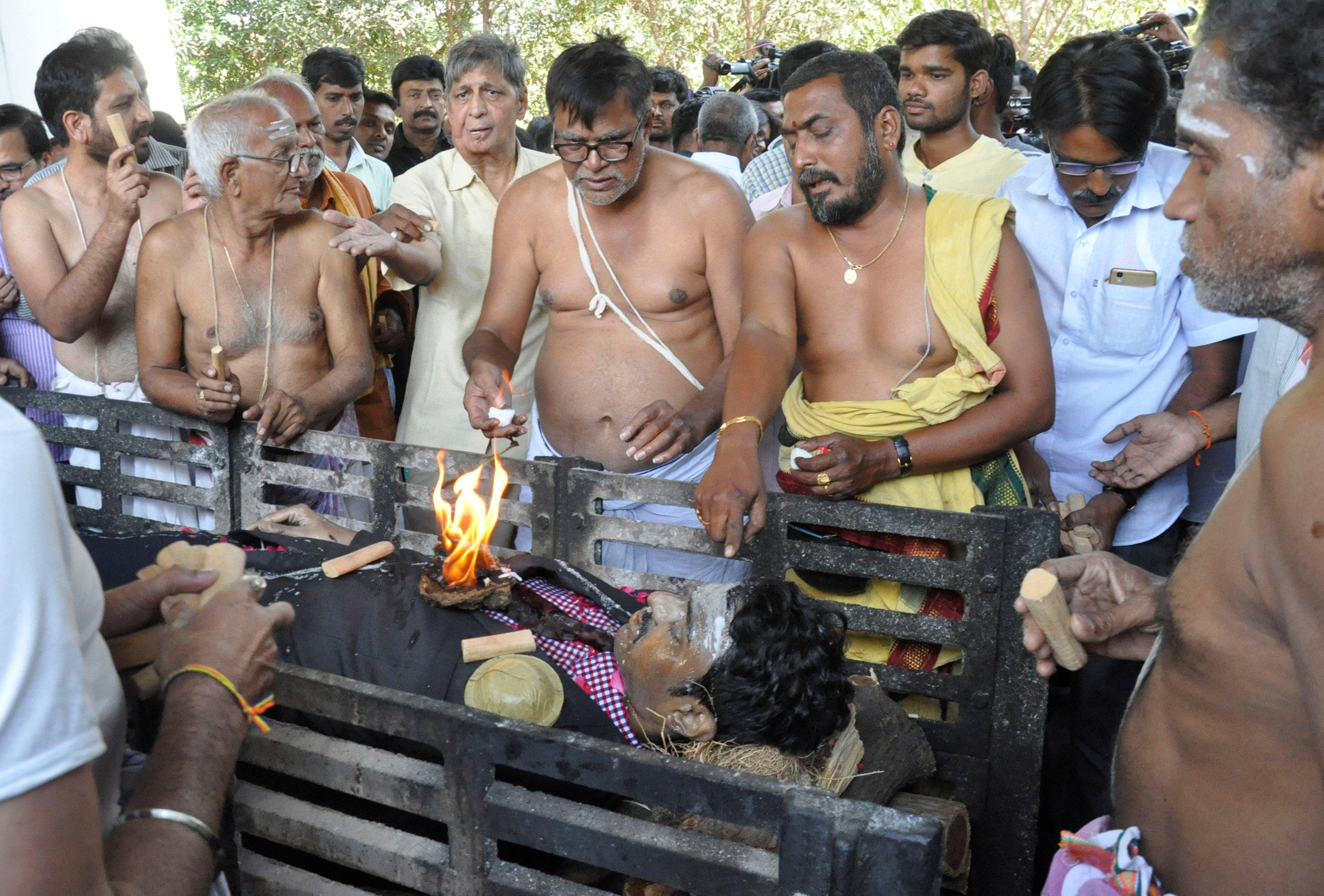 HYDERABAD, India -- Hundreds of grieving family and friends tearfully mourned a 32-year-old engineer in his southern Indian hometown Tuesday after he was killed in an apparently racially motivated shooting in a crowded Kansas bar.

Tears rolled down the cheeks of Srinivas Kuchibhotla’s parents, Madhusudhan Rao and Parvatha Vardhini, as his body was cremated in Hyderabad, the capital of Telangana state.

“It is so cruel. He was such a kind soul, very friendly. He was so excited that he and his wife were going to start a family soon. Now this has happened,” Narayana said.

Police in Missouri arrested Adam Purinton, 51, just hours after the shooting. He’s charged with murder and attempted murder in the shooting in Olathe, Kansas, that some witnesses agree was racially motivated.

Some said they heard Purinton yell at the two Indian men to “get out of my country” before he allegedly shot Kuchibhotla and wounded two others. A bartender at Austin’s Bar and Grill in Olathe said Purinton used racial slurs before firing.

According to a bartender in Missouri who was approached by Purinton several hours after the shooting, he said he thought he had killed “Iranians.”

Kuchibhotla’s mother wailed as the body was taken for cremation. “I had asked him to return to India if he was feeling insecure there. But he used to say he was safe and secure,” she said.

“Now I want my younger son Sai Kiran and his family to come back for good. I will not allow them to go back,” she said. “My son had gone there in search of a better future. What crime did he commit?”

His father Madhusudhan Rao was more philosophical. “I believe in destiny. Whatever was destined has happened.”

He added, “Now I want the U.S. government to take care of the security of our Indians who are working there.”

An Indian External Affairs Ministry statement said on Tuesday that the U.S. government and senior authorities in Kansas “have pro-actively responded to the unfortunate death of Srinivas Kuchibhotla.’”

“It is important to note that the U.S. authorities are engaged with us on the larger concern regarding safety of Indians in the U.S., a matter which continues to receive the government’s top priority,” the statement said.

Kuchibhotla’s body reached Hyderabad from Newark, N.J., on Monday night. His widow, Sunaina Dumala, looking dazed, and his brother, Sai Kiran, who studies in the United States, came by the same flight.

Hours later, the flower-laden body was taken in an open carriage from his home to the crematorium in Jubilee Hills area where it was placed on a wooden pyre and lit as part of Hindu last rites.

According to witnesses, the gunman yelled “get out of my country” at Kuchibhotla and Alok Madasani before he opened fire at Austin’s Bar and Grill in Olathe, Kansas, a suburb of Kansas City, on Wednesday evening. Both men had come to the U.S. from India to study and worked as engineers at GPS-maker Garmin.

Madasani and another bar patron were injured.

Adam Purinton of Olathe was arrested at a bar in Missouri and remains jailed on murder and attempted murder charges. The bartender there told an emergency dispatcher that the suspect admitted he shot two people but described them as Iranian.

India’s Information and Broadcasting Minister M. Venkaiah Naidu, who visited the bereaved family over the weekend, strongly condemned the attack.

“Such incidents should not happen in one of the oldest democracies of the world,” he said.