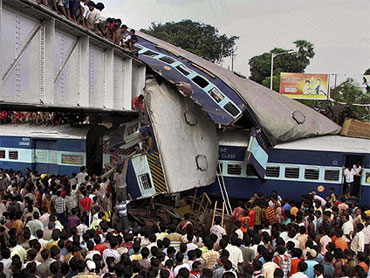 The 22-year-old was asleep on the overnight train, headed to his distant job at a call center, when an enormous jolt awakened him and his coach flipped. He lay with his leg broken for five hours, crushed under the dead bodies of other passengers as he waited for help.

The powerful crash between two express trains at a station in eastern India early Monday morning killed 61 people and injured scores more. The force of the crash was so intense the roof of one car was thrust onto an overpass above the tracks.

Accidents are relatively common on India's sprawling rail network, which is one of the world's largest but lacks modern signaling and communication systems. Most crashes are blamed on poor maintenance and human error.

It was the second major train crash in West Bengal state in two months. On May 28, a passenger train derailed and was hit by an cargo train, killing 145 people. Authorities blamed sabotage by Maoist rebels for that crash.

Railway Minister Mamata Banerjee rushed to the site of Monday's crash and raised the possibility it was another case of sabotage. But there no immediate indication that rebels were to blame, and railway officials said the cause of the crash was unclear.

A handful of accidents in north India in January killed at least a dozen people and were blamed on heavy winter fog that impaired visibility. Other fatal crashes happened when rickety rail bridges give way.

However, accidents as deadly as Monday's crash are rare.

It happened about 2 a.m. local time when the fast-moving Uttarbanga Express slammed into the Vananchal Express as it was leaving the platform at Sainthia station, about 125 miles north of Calcutta.

Two passenger cars and a luggage car of the Vananchal Express were destroyed, leaving a tangle of twisted metal. The passenger cars were reserved for those on the cheapest tickets and such carriages are usually packed to capacity.

"I had fallen asleep and woke up when I felt an enormous jolt and then suddenly I felt my coach turning over," said the 22-year-old, Mithun Mahato, who was heading to his job in the eastern city of Ranchi.

"Three or four passengers fell on top of me and my right leg broke. I lay there crushed under dead bodies for a long time. At least three people sitting next to me in the coach died."

"I was trapped there in horrible pain until rescue workers with gas cutters cut into the coach and pulled me out." He was pulled out around 7 a.m., nearly five hours after the crash.

A passenger on the Vananchal Express, Mohammed Iris, 52, managed to crawl out of his coach an hour after it overturned.

"I was awake when the accident happened. Our train had been given the signal to move but it had barely started moving when I felt an enormous jolt and then I felt the coach turning over."

"Some 8-10 people fell on top of me and my left thumb was almost severed from my hand."

When he finally managed to crawl out, local residents pulled him to safety.

"When I crawled out it was only local people who helped me. They risked their lives to pull me out of the train."

Both men, along with most other crash survivors, were being treated at a government hospital.

Rescuers recovered 61 bodies from the crash site and at least 125 other people were injured, said Surajit Kar Purkayastha, a top police official. The two drivers of the Uttarbanga Express were among the dead.

Rescue teams arrived about three hours after the accident, a local resident said. Before that locals scrambled to help survivors out of the trains and to pull out bodies.

"For many hours it was just the local residents helping and it was very difficult to help without any equipment," the unidentified man told NDTV television channel.

Police official Humayun Kabir told NDTV, however, rescue workers reached the site within an hour of the crash.

Rescue operations were finished by late Monday evening, said Samir Goswami, a railway spokesman. Cranes and laborers were working to remove the mangled coaches so the tracks could be cleared and train services resumed.

The crash brought a hail of criticism against Banerjee and the ruling Congress Party, which appealed for patience as the government worked to determine the cause of the crash.

Senior railway officer Vivek Sahai told reporters that it was difficult to pinpoint who was responsible for the accident without an inquiry report.