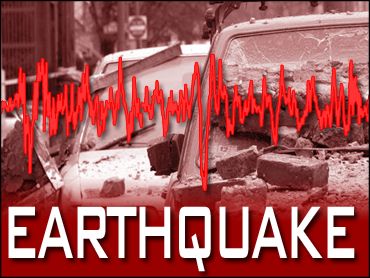 A strong earthquake of magnitude 7.2 hit India's southern Nicobar Islands late on Sunday, triggering panic in the islands and a tsunami warning in Thailand, but there were no immediate reports of casualties or destruction.

The earthquake was felt and triggered alarm in several parts of the zone that was struck on Dec. 26 by the quake-spawned Indian Ocean tsunami, which killed at least 178,953 people in 11 countries and left 49,616 missing, with most of them presumed dead.

A quake also jolted people from their sleep Sunday night in Indonesia's Aceh province, and prompted residents of at least one Sri Lankan village on the coast to flee to a Buddhist temple on higher ground, fearing killer waves were on their way.

No tsunami came. and no injuries or damage were reported in countries close to the epicenter of Sunday's quake.

The epicenter of Sunday's Indian quake, which hit at around 9 p.m. local time, was near the Andaman and Nicobar Islands that lie between India and Thailand, said I. B. A. Rao, a duty officer in New Delhi's Meteorology Department.

"There is nothing to worry about," said India's Science and Technology Minister Kapil Sibal, dismissing another tsunami. He said there had been no significant rise in the sea level two hours after the quake.

The Hawaii-based Pacific Tsunami Warning Center issued a bulletin saying "earthquakes of this size sometime generate local tsunami that can be destructive along coasts located within a few hundred kilometers of the epicenter."

However, "authorities can assume the danger has passed if no tsunami waves are observed near he epicenter within an hour of the earthquake," the bulletin said.

The U.S. Geological Survey reported an earthquake of 7.2 magnitude near the Nicobar Islands at 1542 GMT on Sunday, with an epicenter 81 miles west of Misha, Nicobar Island.

There was no immediate report of any damage in Andaman and Nicobar Islands, said Rana Mathew, a spokesman for the islands' administration.

Near the islands, in Thailand — a country also hit hard by the Dec. 26 tragedy — authorities issued a tsunami warning for the Indian Ocean Sunday night. However, it lifted the warning within hours.

In New Delhi, S. K. Bhatnagar, the deputy director-general of India's Meteorology Department, said: "There can be a local tsunami, but no such activity has been noticed in the region."

Samir Acharya, head of a non-governmental Society for Andaman and Nicobar Ecology in the islands, said by phone: "Everything is fine. I haven't heard of any damage."

Still, many panicked in the islands and in southern India.

"My driver ran up to my house and said some people had come out on the roads," Acharya said.

"There is no harm done. But some people are panicking in the Andaman Islands. The sea is very rough. Yesterday and today we have witnessed a high tide," said Rashid Yusuf, president of the Nicobarese Youth Association.

In the Sri Lankan village of Peraliya village — where the Dec. 26 tsunami swept a commuter train off its seaside tracks, killing 2,000 people — some residents fled to a Buddhist temple on high ground when first word came via the Internet that there had been an earthquake in Nicobar.

There were few reports of fear or panic in other parts of Sri Lanka, where more than 32,000 people were killed on Dec. 26.

But some navy ships that had been in ports were moved out to sea to reduce any chance of damage from waves or sea surges.

"We are taking all precautions in a situation like that and keeping the past in mind," said a navy Commander J.K. Jayaratne.

In Aceh, where more than 131,000 people died on Dec. 26, the earthquake jolted residents from their sleep and rattled their homes for about 10 seconds. Some stepped outside to look for damage, returning minutes later when none was found.

"We also haven't received reports of injuries," said Waluyo, a seismologist in the capital, Jakarta, who like many Indonesians uses only one name.