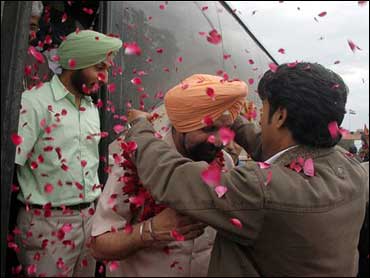 India's prime minister invited Pakistan on Friday to join his country in a "treaty of peace, security and friendship" to end nearly six decades of tension between the nuclear-armed nations.

Prime Minister Manmohan Singh appeared to be proposing an umbrella accord touching on many issues, including the dispute over the Himalayan region of Kashmir.

"I am convinced we can move forward, if all concerned are willing to accept the ground realities; if all concerned take a long view of history and our destiny," Singh said at a ceremony starting a new bus service between India and Pakistan.

Pakistan's foreign ministry welcomed the overture but stressed the need for taking "bold and sincere steps" to resolve Kashmir, which is divided between the two neighbors.

In Islamabad, Pakistan welcomed Singh's overture but stressed there would be little movement if the Kashmir issue was not resolved.

Kashmir is the root of the tension in the region, Foreign Ministry spokeswoman Tasnim Aslam said, calling on India to take "bold and sincere steps to resolve the issue."

India made a similar offer to Pakistan in the mid-1980s, but Pakistan insisted the nations settle the Kashmir question before attempting other peace moves.

"It would be a mistake to link normalization of other relations with finding a solution (to Kashmir)," Singh said.

India and Pakistan have fought three wars since gaining independence in 1947, two of them over Kashmir.

In Kashmir, political groups urged Singh not to sideline the issue.

"Ignoring Kashmir or treating it only as militancy problem will not benefit anyone," said Mirwaiz Umar Farooq, chairman of an umbrella group of political parties advocating independence from India or a union with Pakistan.

"It is a political issue, and only a serious political process will resolve the situation."

India accuses Pakistan of aiding Kashmiri separatist militants, who have waged a bitter insurgency since 1989 in which more than 67,000 have been killed. Pakistan denies the charge.

On Thursday, Musharraf demanded that all foreign militants leave Pakistan immediately or "be crushed."

Relations between India and Pakistan have improved considerably since the latest peace process started in January 2004.

Still, the rivals have taken just small steps toward peace since the October quake that devastated Kashmir, a tragedy that killed more than 80,000 people and initially seemed to bring the countries together.

The latest bus route links the Indian city of Amritsar to the Sikh pilgrimage site of Nankana Sahib in Pakistan, the birthplace of the first Sikh guru.

Other transportation links have been renewed — by bus, train and plane — since the two nations came to the brink of war in 2002.

After his speech, the gold bus, with the Indian and Pakistani flags on its side and bedecked with flowers, pulled slowly out of Amritsar with passengers and the crowd waving.