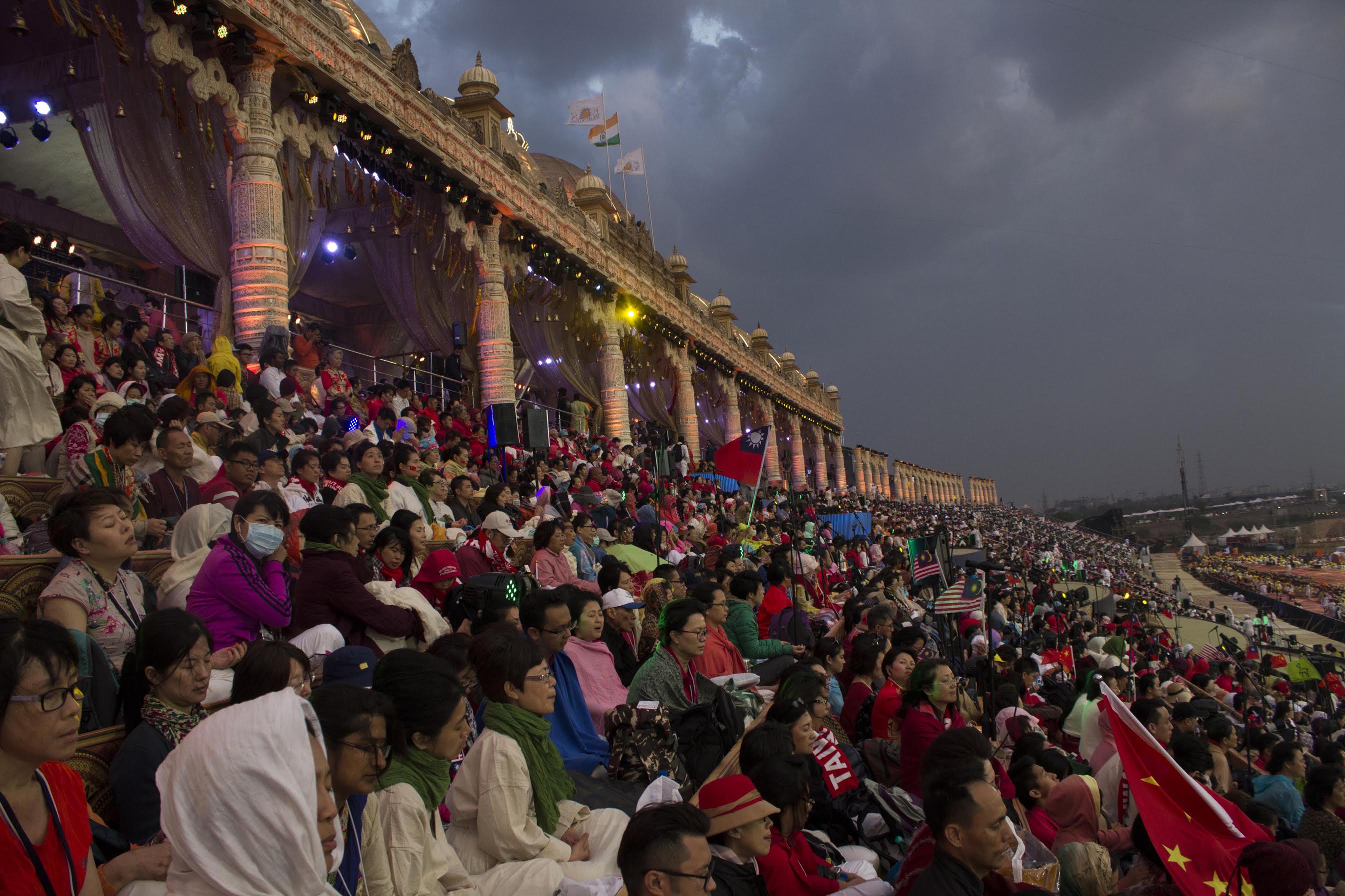 NEW DELHI - Thousands of people and artists from 155 countries thronged to New Delhi over the weekend for a vast cultural festival, sending out a message of unity and peace.

But the festival, organised by Indian spiritual guru Sri Sri Ravishankar's "Art of Living" foundation, faced staunch opposition from environmentalists due to the chosen venue; the banks of the polluted Yamuna River.

Environmentalists accused the Hindu guru and his organization, which runs centers around the world including in the U.S., of flouting environmental norms by constructing a huge stage and occupying an area the size of six football fields for the audience on the river's bank.

Activists say the massive footprint of the festival will cause irreversible damage by compacting the soil and destroying the delicate ecosystem of the river's floodplain. Some native bird populations have already disappeared, they claim.

"This is the art of killing a river, not the art of living," environmental activist Vimlendu Jha told CBS News.

India's environment court, the National Green Tribunal, which was petitioned by several activists to stop the event, gave the go-ahead to festival organizers just hours before the event kicked off on March 11, but it ordered the Art of Living to pay a 50 million Indian rupee (more than $746,000) fine -- and chastized Indian government authorities for allowing such a massive event on the river's bank.

The court also warned the government that no such event should be allowed on the river banks in future.

Faiyaz Khudsar, who is in charge of the Yamuna Biodiversity Park, told CBS News the festival would have "catastrophic" consequences for wildlife along the river.

"The marshes and wetlands may have been silted or filled up resulting in the disturbance of the ecosystem. It will take some time to find out the exact damage. What it requires now is ecological intervention by humans, which takes a lot of time," said Khudsar.

Manoj Mishra, who heads the Mission for Yamuna, which filed the petition with the environmental court trying to block the festival, said the event was a violation of measures put in place during 2015 aimed at improving the environment.

He said the court-approved Revitalisation Project 2017 was being "brazenly violated by clearing of vegetation, dumping of debris and earth, leveling of flood plain, destruction of biodiversity and construction activity."

Sri Sri Ravishankar, who has an estimated 300 million followers in more than 150 countries, previously said he would rather go to jail than pay the fine. He changed his mind, however, agreeing to pay the amount as "compensation" for restoration work on the river.

Jha, the environmentalist -- who claims his black-flag protest outside the venue was stopped by police, told CBS News: "It's like somebody says he wants to rape a woman and then compensate her. Should we allow him to rape the woman? They are raping a river."

"We will make a proper plan and do something for the Yamuna. I have consulted top environmentalists, who have done a study and said that no harm will be done to the floodplains," insisted Ravishankar.

The guru's organisation insisted the event would not damage, but rather help the river.

"We have not built any permanent structures. We will ensure that the place is left cleaner and more beautified," Art of Living spokesperson Dinesh Ghodke told CBS News.

According to the foundation, the event was expected to attract 3.5 million people over three days, but heavy rain kept the numbers lower.

The event was inaugurated by Prime Minister Narendra Modi and attended by top ministers in his cabinet. Even the army was roped in to build temporary bridges on the river -- a move criticised by many as the misuse of the nation's military force for a private event.

The guru is seen as being close to the prime minister. In Parliament, opposition parties questioned the reason behind the Modi government's backing for the controversial event.

In what seemed like a jab at critics, Modi said while addressing the event: "If we criticise everything we have, why should the world look at us?"

Indian President Pranab Mukherjee, who was earlier scheduled to attend the festival, pulled out days before when the controversy over the damage to environment began.

On the last day of the extravaganza, Ravishankar sought to highlight the success of the event. "This is the cultural Olympics of the world. Where do you see artists from so many countries, people of different faiths come together on one platform for world peace?"

The godman claims religious leaders from all over the world, including the pope, sent him their good wishes. He also claimed that the Australian government has written to him offering to host the next such cultural event.

British Prime Minister David Cameron has reportedly invited him to address the House of Commons, sending the invite via Parliamentarian Matthew Offord, who attended the festival.