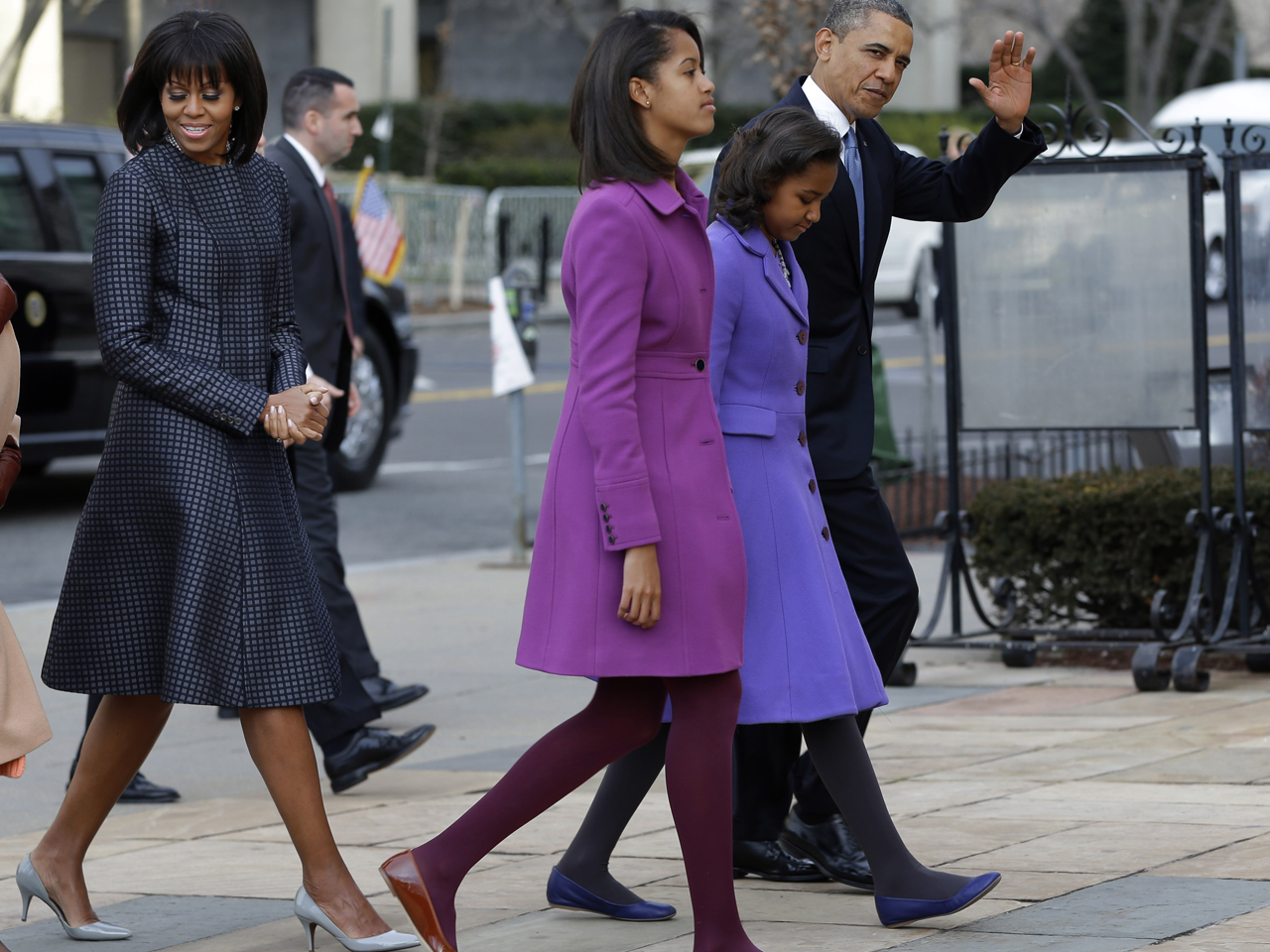 The first family headed out to Monday's inaugural festivities with Michelle Obama leading a very coordinated fashion parade in a navy-silk, checkered-patterned coat and dress by Thom Browne that were inspired by a menswear necktie.

The rest of her Inauguration Day outfit included a belt and shoes from J. Crew, necklace by Cathy Waterman and a cardigan by Reed Krakoff, whose ensemble she also wore to yesterday's intimate, indoor swearing-in ceremony. After church, Mrs. Obama changed into a pair of Reed Krakoff boots and added a pair of J. Crew gloves to her ensemble.

President Barack Obama wore a blue tie with his white shirt, dark suit and overcoat. Malia Obama had on a plum-colored J. Crew coat with the hemline of an electric-blue dress peeking out and a burgundy-colored scarf, and her younger sister Sasha had on a Kate Spade coat and dress in a similar purple shade.

"It is an honor that Sasha Obama chose to wear Kate Spade New York," said the company's creative director, Deborah Lloyd, in an email to the Associated Press. "She epitomizes the youthful optimism and colorful spirit of the brand. We are so proud to have been a part of this historic moment."

Jenna Lyons, creative director of J. Crew, said it was "a huge point of pride for all of us" to be a part of the day -- as the brand was back in 2009 when the girls wore outfits by CrewCuts, its children's label.

"It's amazing to see the evolution of the family. I love the way Michelle looks. She looks beautiful in something so clean and tailored. It's such an elegant choice," Lyons said, "and they all look so sophisticated! You can see how the girls have grown up in the four years, and they're still so alive and vibrant, but more sophisticated."

Mrs. Obama has worn Browne's designs for other occasions, including a gray dress with black lace overlay to one of the presidential debates last fall, and she honored him last summer at the Smithsonian's Cooper-Hewitt National Design Awards for his contribution to fashion.

Browne made his name in modern -- very modern -- menswear, but he launched womenswear in 2011. He was in Paris on Monday, having just finished up previews of his fall men's collection, and wasn't immediately available for comment.

Simon Collins, dean of the school of fashion at Parsons The New School for Design in New York, said the Obamas dressed in their typical fashion: one that shows pride in their appearance.

"They are a stylish couple and their children look fabulous. Too many people get dressed in the dark," he said. "They show it's good to dress up, take pride in how you look. ... It's a wonderful example for America and the rest of the world."

He also noted that the Obamas seem to understand that the fashion industry is a driving force in the U.S. economy and that its lobby is a powerful one. They don't treat fashion frivolously, he observed.

But Collins said he was a bit surprised the public doesn't pay much attention to the president's wardrobe. He joked that Obama should perhaps try one of Browne's signature shrunken suits - the ones that show a man's ankles.

At the end of the Inaugural festivities, Mrs. Obama's outfit and accompanying accessories will go to the National Archives.