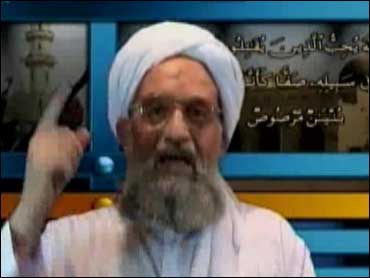 In a rare English-language message partially aired Sunday that is believed to be from Al Qaeda's No. 2 leader, Ayman al-Zawahri claimed Pakistan is now "virtually ruled from the American Embassy."

The Pakistani ARY channel gave a copy of the tape, whose authenticity could not immediately be verified, to The Associated Press. However, an AP reporter who has reviewed his past recordings said the voice sounds like that of al-Zawahri.

It is not clear when the tape was made, but it includes apparently recent pictures of ex-Prime Minister Nawaz Sharif and others in the ruling coalition, indicating it was created since the February election that brought President Pervez Musharraf's foes to power.

The audio overlays a series of images, including a static one of al-Zawahri, who along with Osama bin Laden is believed to be hiding in the rugged and lawless region along the Afghan-Pakistan border.

Earlier this month, CBS News reported it had obtained a copy of an intercepted letter from unnamed sources in Pakistan that urgently requested a doctor to treat al-Zawahri. A spokesman for a top Taliban leader in Pakistan denied the report.

In the tape aired Sunday, Al-Zawahri lists a litany of charges against Musharraf, who he says has betrayed Muslims by supporting the U.S. after the Sept. 11, 2001 attacks in its battle against the Taliban in Afghanistan.

"Pervez has insulted and compromised Pakistan's sovereignty by allowing the CIA and FBI to operate freely in Pakistan and arrest, interrogate, torture, deport and detain any person, whether Pakistani or not, for as long as they like, thus turning the Pakistani army and security agencies into hunting dogs in the contemporary crusade," said the purported tape from al-Zawahri.

Much of the hour-long address is an appeal to Pakistani soldiers to rethink their role in the fighting that has often pitted them against their countrymen, especially in the tribal regions.

Al-Zawahri also mentions last year's deadly military siege of Islamabad's radical Red Mosque - an incident that militants have often used to rally support for their cause.

"Every soldier and officer should absolutely disobey any order to kill Muslims or aid their killers," says al-Zawahri, who also singled out Army Chief Gen. Ashfaq Parvez Kayani as a "hostile enemy of Islam."

He urged Pakistanis to rise up and fight the United States or at least support the insurgents.

The tape carries the logo of al-Sahab, al Qaeda's media arm and, though in English, also has English subtitles and sometimes Arabic ones.

It was delivered to ARY by a man on a motorbike Sunday, according to Faizullah Khan, a reporter for the channel. It not only features static images, but also includes clips of interviews Musharraf has given, footage of him giving speeches and other video segments.

Ben Venzke - the head of IntelCenter, a U.S. group that monitors and analyzes militant messages - said it was the first official message released by al-Sahab in which the Egyptian-born al-Zawahri speaks English.

Al-Zawahri is a doctor by training and speaks English. In the tape he talks precisely and clearly, though with an Egyptian accent.

He apologizes for speaking "the language of the Muslims' enemies" but notes he does not speak the "charming" Pakistani Urdu language and that most Pakistanis do not know Arabic.

The tape's release comes amid U.S. pressure on the Pakistani government to do more to eliminate Taliban and al Qaeda fighters in its tribal regions bordering Afghanistan, areas considered militant sanctuaries.

The main ruling parties, however, have been caught up in internal political battles, including disputes over what to do with Musharraf. Last week, the ruling parties announced they had agreed to seek to impeach the president, ramping up the pressure on him to resign.

Musharraf, who took power in a 1999 military coup and dominated Pakistan for years, has been largely sidelined since the February elections but has shown no intention of stepping down.