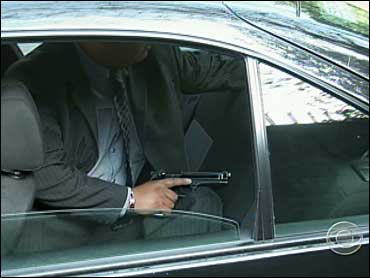 One outgrowth of Mexico's drug wars is a disturbing rise in kidnappings. According to official estimates, 60 to 70 people are kidnapped there each month, though the actual number is probably much higher.

Mexican authorities insist they're making progress. But anyone with cash is in danger, as CBS News correspondent Seth Doane reports from Mexico City.

CBS News talked to "Gabriel," a Mexico City lawyer who did not want his face shown because he worries his money makes him a target for kidnappers.

Outside, his armed guards keep watch, while security camera video is displayed on his desk

Everyone dreams of being wealthy, but in Mexico it is becoming a liability.

Gabriel lives nearly 1,000 miles from the troubled border region, where violence between government forces and drug cartels has claimed more than 7,000 lives in 15 months.

But even here in Mexico City, if people are not touched by crime itself, they are moved by fear.

Gabriel says that many of his neighbors, business partners and clients have bodyguards too.

"It's common," he says. "If the authority don't protect us, we are going to protect [ourselves]."

Gabriel employs five bodyguards. Each one costs about $700 a month. He fears robbery and kidnapping most. Guns drawn, they trail his armored car.

"The idea of an armored car is to leave the place alive," says Jose Macouzet, sales director for Ballistic Protection, a company that armors ordinary cars.

Business is also up at the bullet-proof clothing store "Miguel Caballero," where custom-made leather and suede jackets are lined with armored plates. The store sells hundreds a year at $2,000 to $6,000 each - security for the super-rich.

No one really knows exactly how many kidnappings there are in Mexico. In many cases they're not even reported to police, But the saying here is that kidnappings are definitely "more democratic" - that it's no longer just the super-rich that are targeted.

Jose describes himself as an average, middle-class business owner who could not afford body-guards.

Six months ago kidnappers abducted him at his office and blindfolded him. They held him for 15 days.

His wife negotiated his release - and recorded the chilling phone calls.

In one, a kidnapper tells her, "If you don't have a good answer for me, I'm going to beat him and start sending you his fingers."

They sold their valuables, but would not say how much ransom they paid.

Negotiating often does not work. in one recent case near Mexico City, a brazen firefight took place after police stormed a house when kidnappers refused to give up.

Still, despite the deadly headlines, authorities say they're making progress.

"The news reports focus mostly on the crime," says Mexico City prosecutor Miguel Angel Mancera. "The captures do not get the same attention."

Jose's kidnappers are still on the loose. He lives in fear - and in hiding.

As a drug war over turf and trafficking continues to escalate, so do the jitters and an anxious nation asks: How much worse will it get?