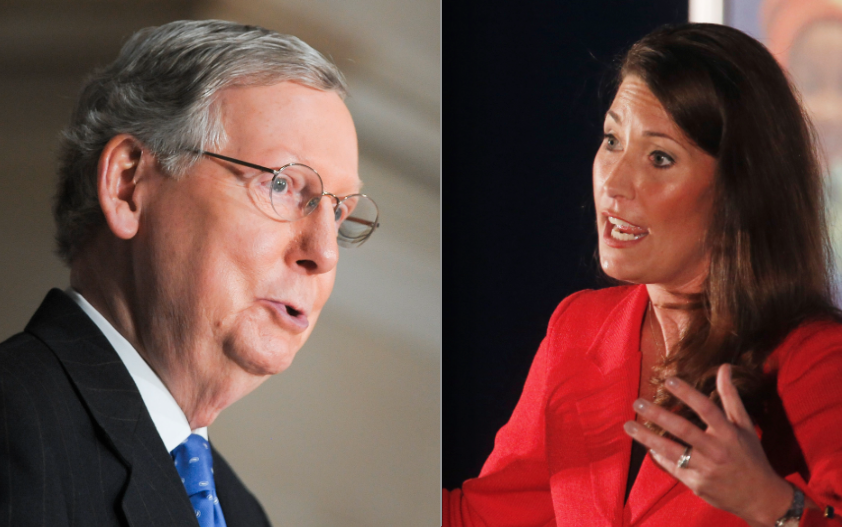 Plenty of marquee Senate races around the country are attracting attention from prominent Republicans and Democrats but one this week is rolling out the party heavyweights.

That's the Kentucky Senate race, where 2012 GOP presidential nominee Mitt Romney headlines a fundraiser Thursday for Senate Minority Leader Mitch McConnell. McConnell is hoping to not only hold off his Democratic challenger, Kentucky's Secretary of State Alison Lundergan Grimes, but he's hoping his party picks up enough seats on Election Day to take control of the Senate.

Romney, for his part, is maintaining an active midterm campaign schedule for candidates across the country, and will cover seven states and nearly 6,000 miles in five days of cross-country travel.

Not to be outdone, Grimes is getting help from former President Bill Clinton, who appears in an ad for Grimes in his first TV spot of the 2014 campaign.

The ad shows footage from an early August appearance Clinton made for Grimes in Kentucky. "What's being a senator about, anyway?" he says in a clip from the rally. "One candidate believes it's about getting new jobs, getting good jobs, giving middle class people a chance to give their kids a decent life."

"Nobody can tell me it's not a senator's job to create jobs," Clinton continues, a not-so-subtle knock at McConnell for telling a local newspaper that it's "not my job" to bring jobs to Kentucky (McConnell said his comments were taken out of context).

Even with Clinton's help, Grimes is struggling to catch up with McConnell. He has maintained a steady lead in September polling, ranging from a four- to eight-point advantage over Grimes.

The latest sparring in the campaign has revolved around who is taking taxpayer money in the form of their salary while campaigning (the answer, theAssociated Press says, is both candidates).

Last month, a Grimes ad called "Where Was He?" accuses McConnell of missing hundreds of Senate Committee meetings.

The response from the McConnell campaign earlier this week was an ad entitled "Absences," that accuses Grimes of fleecing taxpayers by campaigning while she should be on the job.

"Grimes still takes her salary, while her parking space at the state capitol sits empty, day, after day," the narrator says in the ad. The ad comes after Grimesreleased an ad last month titled "Where Was He?" that accused McConnell of missing hundreds of Senate committee meetings.

Of course, McConnell is paid by taxpayers as well - $193,400 a year - and Congress has only spent 26 weeks in session this year. Two McConnell spokespeople wouldn't tell the Associated Press if the minority leader has returned his pay during campaign season.

Similarly, Grimes' campaign didn't answer questions about how many work days she has missed during the campaign or how she manages the Secretary of State office during those days.

Stephen Voss, a University of Kentucky political science professor told the Associated Press it's an easy attack for McConnell to make.

"Congress has set things up to make it easy" for incumbents, he said. "They have used the institution's rules and resources to help build up an advantage for [lawmakers] when they run for re-election. Whereas the state of Kentucky has not set up the secretary of state's office to make it easier for them to seek other jobs."