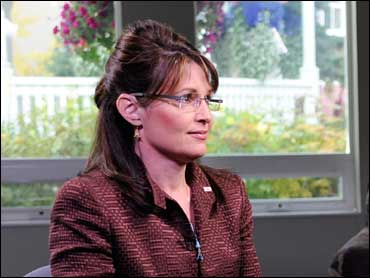 In her first televised interview since being named to the GOP ticket, Sarah Palin says she's ready to be president if called upon. However, she sidestepped questions on whether she had the national security credentials needed to be commander in chief.

In the interview broadcast Thursday, Palin sought to defend her qualifications to assume one of the most powerful jobs in the world. But she struggled with foreign policy, unable to describe President Bush's doctrine of pre-emptive strikes against threatening nations and acknowledging she's never met a foreign head of state.

Pressed about what insights into recent Russian actions she gained by living in Alaska, Palin told Charles Gibson of ABC News, "They're our next door neighbors and you can actually see Russia from land here in Alaska, from an island in Alaska."

Palin, 44, has been Alaska's governor for less than two years and before that was a small-town mayor. She was McCain's surprise selection for the No. 2 slot on the ticket, raising questions about her readiness to serve in the White House, particularly during wartime.

Asked whether those were sufficient credentials, Palin said: "It is about reform of government and it's about putting government back on the side of the people, and that has much to do with foreign policy and national security issues." She said she brings expertise in making the country energy independent as a former chairman of the Alaska Oil and Gas Conservation Commission.

Palin said other than a trip to visit soldiers in Kuwait and Germany last year, her only other foreign travel was to Mexico and Canada. She also said she had never met a head of state and added: "If you go back in history and if you ask that question of many vice presidents, they may have the same answer that I just gave you."

In the interview Thursday, Palin: