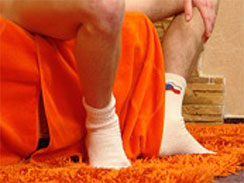 According to a report by GlobalPost.com, the Czech Republic has become one of the leading production centers for gay pornography, behind the United States, which still has a powerful grip on the international market.

What makes the Czech Republic such a hub?

With unemployment rates high, "models" are attracted to the relatively big paydays. Before a recent spike in competition, Czech actors could make thousands of dollars for just a few days work.

Culturally, the Czech Republic, particularly in Prague, is much more liberal in their outlook on sex and sexuality than, say, the U.S.

Another key difference between the Czech and American industries is that the vast majority of Czech actors describe themselves as 100 percent straight - some with girlfriends and others married. According to the report, the presence of straight men in gay sex scenes boosts the films' desirability.

Below is video from the GlobalPost story: