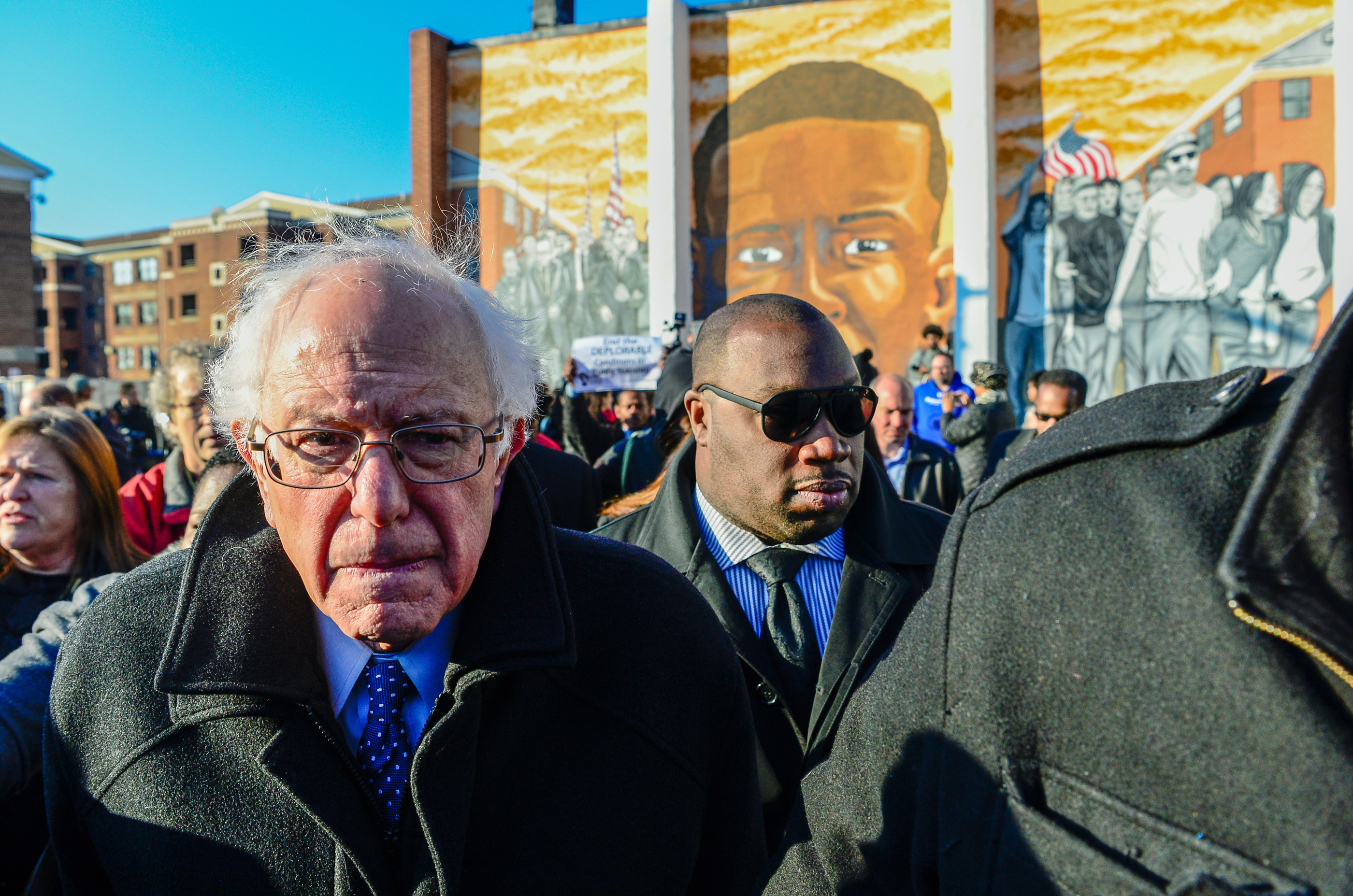 BALTIMORE, Maryland -- As Bernie Sanders walked down the street in West Baltimore on Tuesday morning, a reporter called out to him.

"What do you think when you look around Baltimore?" she asked.

"One would not know that you're living in the wealthiest country in the history of the world," he said. "What you look at is what would a third world country look like. It's a pretty sad state of affairs."

Sanders was walking in the Sandtown-Winchester neighborhood, where Freddie Gray was arrested earlier this year and where riots grew violent after his death in police custody. His tour guides, Rev. Jamal Bryant and Pastor Lisa Weah, pointed out abandoned buildings and which blocks had city housing. With dozens of reporters and bystanders in tow, the tour ended at a mural of Gray.

"It is stunning that we're less than an hour away from the White House and the United States Congress," Sanders said. "In communities like this, what we are seeing is kids dropping out of school, being in bad schools, being in dilapidated housing, and it's time to transform our national priorities."

Sanders traveled to Baltimore on Tuesday for a "listening session" with African-American community and faith leaders like Bryant. Though Sanders' call for federal reinvestment of resources and energy in education and job creation isn't new, the visit brought his message about the everyday challenges faced by the poor into sharp relief.

"There are no branch banks. Where do I do my banking? What do I have to do to cash my check? Point being, it is very expensive to be poor," Sanders said during the meeting, which was held at a community center named after Gray. "I didn't see a decent grocery store around here. What are moms feeding their kids? Potato chips?"

Sanders also discussed the need for criminal justice reform and a "revolution" in the way law enforcement agencies police their communities.

"The federal government can play a role with federal incentives to show what a good police department can be," he said, adding that children should not see police officers as "enemies."

Bryant, speaking to reporters after the meeting, said the conversation was productive but made clear that the attendees were not offering a formal endorsement to Sanders in his race for the Democratic nomination. He said he would soon be meeting with other presidential candidates on both sides of the race, including Rand Paul and Hillary Clinton.

"We want to hear from all of them to hear what is their blueprint and roadmap to strengthen and equip and empower the black community," Bryant said.

Sanders took five questions during the press conference and, after one of his opponents recently criticized him for staying stubbornly on-message in light of recent events, he defended his focus on the economic issues at the heart of his campaign.

"You want to ask me about ISIS, we will talk about ISIS," Sanders said in response to a reporter who asked if he did not wish to broach the subject. "ISIS and terrorism are a huge national issue that we've got to address but so is poverty, so is unemployment, so is education, so is healthcare, so is the need to protect working families, and I will continue to talk about those issues."