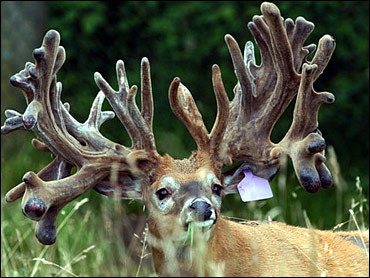 When male animals strut their stuff — the rainbow plumes of peacocks, the mighty tusks of an elephant — they might be flaunting their potential for fatherhood, researchers in Spain say.

Biologists working for Spanish government's top scientific research body say they have found evidence of this phenomenon in deer that might apply to other species.

The idea is that features long-considered to be only for show, or self-defense, might indicate the quality of an animal's genes.

In the case of deer, for instance, it was believed antlers were simply a weapon for head-knocking battles with rivals, often over a female, and the winner got the doe.

But the Spanish team has found a direct link between the length and complexity of a buck's horns and the quality of its sperm.

Indeed, long, multi-pointed antlers on a buck signal that it is a potent mate and females might seek out such males for this reason, said Montserrat Gomendio, a biologist who's part of the team that did the research.

Gomendio works at Madrid's Museum of National Sciences, which falls under the Superior Council of Scientific Investigations. The study was based on more than 200 Spanish red deer killed by hunters and was published in Proceedings of the Royal Society, a British scientific journal, and Biology of Reproduction, an American publication.

She said that human hunters measure deer antlers meticulously, have a system for evaluating them in terms of size and number of points and award prizes for good sets.

"What this means is that what we value from an aesthetic standpoint has a biological foundation, in the sense that it transmits information on the quality of that male," Gomendio said in an interview.

Horns on male deer are known as secondary sexual characters, which were believed to lack any kind of information on reproductive capacity.

But the Spanish findings suggests otherwise and might be applied when studying other mammals with similar features — like male elephants with ivory tusks or primates with large incisors — to see if they also say something about the specimen other than its ability to fight, Gomendio said.

"It flies in the face of what we have found in other species," he said. "The whole thing is fabulous."

He cited peacocks as candidates for further study: "That fabulous tail, that people thought might just be to attract a female. She might be making her choice not on simply how dazzling it is but because it might reflect the quality of the male's sperm."

Birkhead said Charles Darwin assumed females reacted only to what they saw when it came to selecting a mate. He said Darwin was "a bit embarrassed about writing about sperm and stuff so he kind of avoided all that. That's why this is a new field of research."