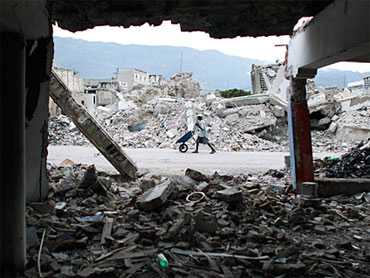 The IMF says it has canceled Haiti's $268 million debt and will lend the earthquake-devastated country another $60 million to help it with reconstruction plans.

The International Monetary Fund said Wednesday the decision is part of a plan for long-term reconstruction after the Jan. 12 magnitude-7 quake, which killed as many as 300,000 people.

The three-year loan carries a zero interest rate until 2011 which then rises to no more than 0.5 percent.

The Washington-based fund says its moves should encourage aid contributions to the impoverished country.

"Donors must start delivering on their promises to Haiti quickly, so reconstruction can be accelerated, living standards quickly improved and social tensions soothed," IMF chief Dominique Strauss-Kahn said in a statement.

In Haiti more than six months after the quake, rubble and collapsed buildings still dominate the landscape.

The number of people in relief camps has nearly doubled to 1.6 million, while the amount of transitional housing built is minuscule. Crime is more prevalent since the quake, with attacks in camps terrorizing thousands, especially women and girls.

Most of the $3.1 billion pledged for humanitarian aid has paid for field hospitals, plastic tarps, bandages, and food, plus salaries, transportation and upkeep of relief workers.

At a March conference, donors pledged a total of $9.9 billion - money that is separate from the humanitarian aid - to help Haiti recover.

But less than 2 percent of it has been delivered. The rest is mired in bureaucracy and politics of the more than 60 countries and organizations that pledged to help.