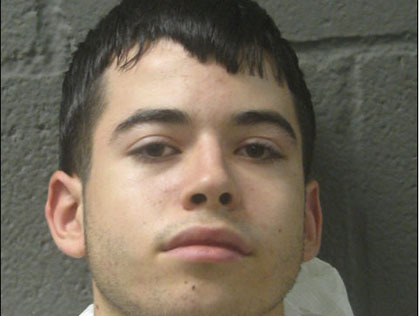 (CBS/WBBM/AP) BRIDGEVIEW, Ill. - John Granat, a 17-year-old accused of beating and killing his parents, was ordered held without bond Tuesday on first-degree murder charges. Granat is accused of murdering his mother and father sometime between 10 p.m. Saturday and 3 or 4 a.m. Sunday inside their Palos Park home, 25 miles southwest of Chicago, reports CBS station WBBM.

The couple's son was pulled over by police just hours before making the emergency call and none of his friends could vouch for his whereabouts.

According to Cook County Sheriff Tom Dart, the high school senior gave "several alibis...none of which made any sense, none of which turned out to be true."

Granat seemed to show no emotion during Tuesday's hearing. He remained calm as the prosecutors recounted the grisly details about his parents' death.

Granat told police that he had fallen asleep in the basement of the home around 12:30 a.m. Sunday, and was home the entire night. He claimed he woke up to find the house ransacked and his parents dead.

But police say this story was proven to be untrue. It turned out that he had been pulled over by Palos Heights police for a minor traffic offense at 5:17 a.m. that morning, sheriff's police said.

Sheriff's police said several conflicting stories came out of Granat's mouth, until finally, he told investigators that he had needed money, and let a friend come into the house while he was out. Granat said he fell asleep in his own car and didn't come in until 7 a.m., when he found his parents dead, according to sheriff's police.

But sheriff's police concluded that Granat himself was the killer. They also found out from several friends that he had threatened to kill his parents several times before.

Dart said there were "absolutely no signs of forced entry" at the home.

As for a motive, Dart said, "It's clear that the defendant had a difficult relationship with this parents at times and at different times he made threats. ... He made threats to kill them."

But Granat's attorney said police have the wrong man.

"There's no way that that young man could have done that those two human beings," defense attorney Rick Beuke said.

Granat is to return to court for a preliminary hearing on Tuesday, Sept. 20.