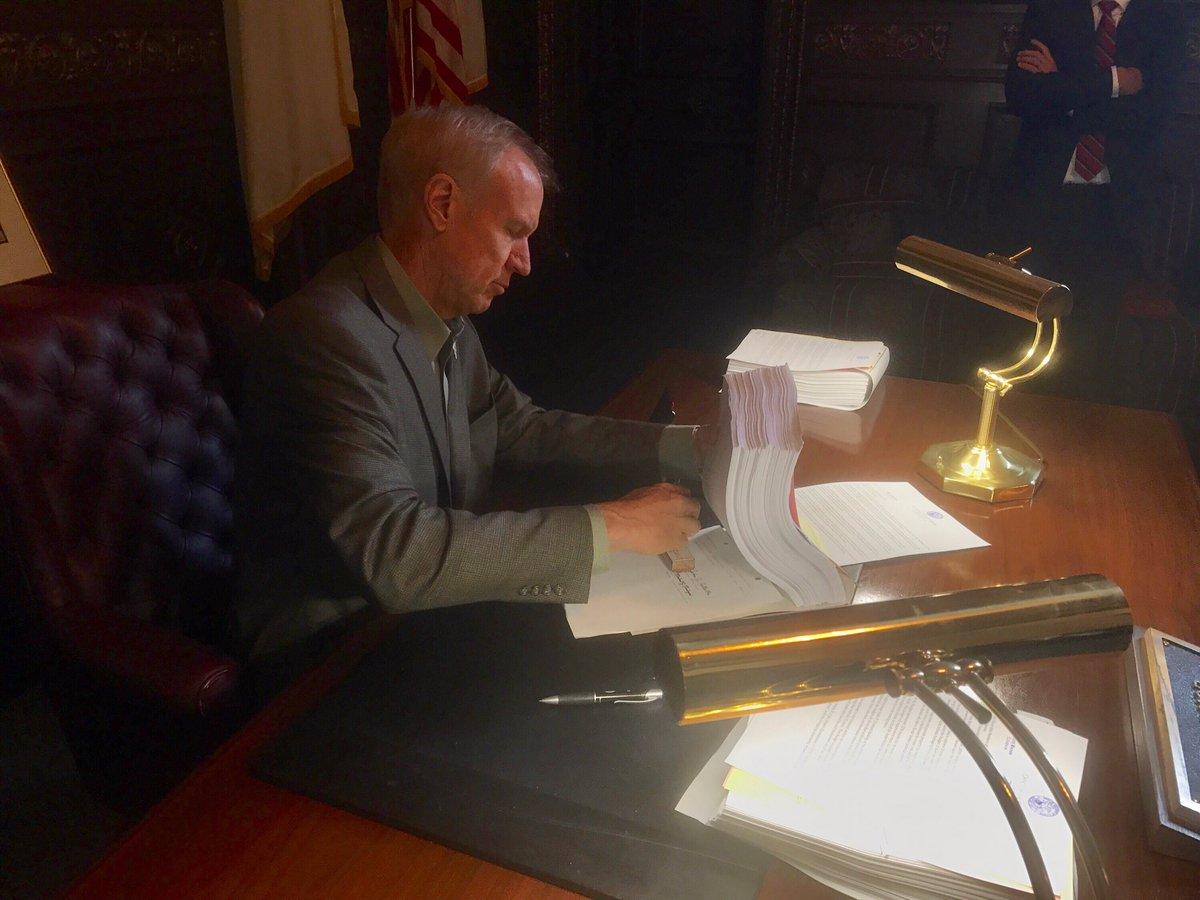 SPRINGFIELD, Ill. -- The Illinois Senate voted Tuesday to override Gov. Bruce Rauner's vetoes of a $36 billion budget package fueled by a $5 billion tax increase designed to start digging out of the nation's deepest budget crisis since at least the Great Depression.

The Democratic-controlled chamber completed its work within 30 minutes of the Republican governor's vetoes, sending the package back to the House for an override vote that would give Illinois its first annual budget since 2015.

The House adjourned late Tuesday without action. A quorum of members failed to show up on the Fourth of July holiday, prohibiting work. The House returns Wednesday morning but its leadership gave no indication of whether overrides are in sight.

"The package of legislation fails to address Illinois' fiscal and economic crisis - and in fact, makes it worse in the long run," the first-term governor wrote in a veto message that claimed the Democrats' proposal remains $2 billion in the red. "It does not balance the budget. It does not make nearly sufficient spending reductions."

Rauner's role in stymieing a budget deal since taking office in 2015 has been to demand a freeze on local property taxes and "structural" changes to boost business. The governor acted about three hours after the Senate voted to hike the personal income tax rate by 32 percent. Individual rates would go from 3.75 percent to 4.95 percent. Corporations would pay 7 percent instead of 5.25 percent.

Only two Democrats in the Senate voted against the budget; one Republican crossed party lines to support it, CBS Chicago reports.

Democrats say it provides the revenue bridge to fund a $36 billion blueprint, which also includes $2.5 billion in spending reductions.

"We are faced today with the fierce urgency of 'now,'" the tax increase legislation's sponsor, Sen. Toi Hutchinson of Olympia Fields, said Tuesday morning before the first vote. "We don't have any more time. And too late is not good enough."

The House approved the tax increase with 72 votes on Sunday, one more than necessary to override a veto, with the help of 15 Republicans. Whether they'll continue to defy Rauner remains to be seen.

House Speaker Michael Madigan announced shortly after the Senate action that there would be no House action to override Tuesday, but his spokesman said he couldn't answer why. Later, when only 54 members answered the House quorum call, Madigan and Republican leader Jim Durkin, of Western Springs, were among 64 absences.

Although there's no firm deadline, credit-rating houses have vowed to downgrade the state's creditworthiness to "junk," signaling to investors that buying state debt is a highly speculative venture. The bond houses predicted a downgrade without a fix by the July 1 debut of the fiscal year -- the third consecutive fiscal year Illinois has opened without an approved budget plan. But Fitch Ratings and S&P Global Ratings gave Illinois some breathing room on Monday, issuing notices marking the House tax increase approval a day earlier and indicating they wouldn't take immediate downgrade action.

Government has limped along for two years on the strength of court-ordered spending, but the state comptroller says the treasury will be $185 million short of what's needed to cover basic services by August.

With a $6.2 billion annual deficit and $14.7 billion in overdue bills, the United Way predicts the demise of 36 percent of all human services agencies in Illinois by year's end. Billions of dollars in road construction work is shutting down. Public universities have been cut to the bone and face a loss of academic accreditation.

Sen. Dale Righter of Mattoon, who represents Eastern Illinois University in Charleston, was the lone Republican to support the tax increase. He said he'd like to have seen more spending reductions, "but in a Democrat-majority legislature, this is as good as we can get."

"The most important issue we face right now is the fiscal stability of our state," said Righter, a legislator since 1998. "We need to protect our critical state services and the citizens of Illinois who rely on them. This budget is balanced."

A third piece of legislation in the package, which authorizes implementing the budget, includes a provision allowing the state to borrow $6 billion to pay down the bill backlog -- presumably at a lower interest rate than it pays in interest for past-due status.

If Rauner doesn't like the tax plan, the financial world does. On Monday, two of the nation's top credit-ratings agencies signaled it would be a good idea for Rauner to accept the results. Fitch Ratings and S&P Global Ratings, having earlier threatened to move Illinois' creditworthiness into "junk" status without swift action to approve a budget, smiled favorably on the financial outlook.

Rauner promised to veto the tax measure because Democrats who control the General Assembly have not agreed to resolve his pet issues, including statewide property tax relief, cost reductions in workers' compensation and benefits for state employee pensions, and an easier process for dissolving or eliminating local governments.

"It's regrettable that I stand here today not capable of being able to support this package, not because what's in the package is bad, but because it's incomplete," said the Senate's newly minted minority leader, Bill Brady of Bloomington. "We need a comprehensive budget package with reforms."

Democrats and Republicans have negotiated the issues that Rauner considers outstanding in the two weeks since the special session began. But the GOP claims talks broke down over the weekend in advance of Madigan calling the budget votes. Madigan said Monday that those talks were ongoing and Cullerton paid tribute to the cooperative pledge before leaving town Tuesday.

"I can't tell you when we'll be coming back; a lot of things depend on what happens in the House," Cullerton said, "but we'll continue to try to enact, and put on the governor's desk, many of the reforms that he's asked for."