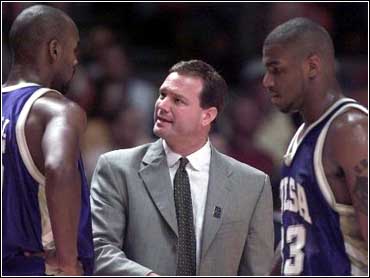 Bill Self, who led Tulsa to the quarterfinals of the NCAA tournament, was hired Friday as Illinois' new basketball coach.

Self, who led the Golden Hurricane to a 74-27 record in three seasons, takes over an Illini program that returns all of its starters and key subs after going 22-10 last season.

"I accept the challenge," Self said at a news conference. "I'm excited. This place has a lot to offer, probably more than I even realize right now."

The coach met his new players Friday morning after working late into Thursday night to finalize a $900,000 a year contract.

Illinois athletic director Ron Guenther moved fast. Lon Kruger quit May 26 to become head coach of the Atlanta Hawks. Friday was the first day Illinois could hire a coach because of NCAA rules.

"It's been sort of a short courtship, but they told me Ron Guenther worked quick," Self said.

Guenther contacted two candidates Oklahoma's Kelvin Sampson and Self. Late Wednesday night, Sampson said he talked to Guenther but opted not to take the job. By 2 p.m. Thursday, Guenther called Tulsa to ask athletic director Judy MacLeod for permission to interview her coach.

Self was on a private plane to Illinois by Thursday evening after having told players and colleagues at Tulsa that the Illinois rumors were real and talks were moving quickly.

Guenther introduced Self at a 1 p.m. news conference on Friday. A few hours earlier, Guenther called UI's board of trustees, who were meeting in Chicago, to inform them of his choice. The board will be asked to approve Self's contract at its July meeting, university spokeswoman Lex Tate said.

One reason for moving fast was the impending summer recruiting season, which opens July 7.

"I think Bill has all the energy and the enthusiasm to get the job done," Guenther said.

Tulsa was 32-5 last year under Self and reached the regional finals of the NCAA tournament for the first time in school history. His success at Tulsa made Self, 37, a hot prospect in the coaching market, and his name was among the first mentioned when Kruger abruptly left.

Self spent nine years as an assistant coach, one year at Kansas under Larry Brown and eight years at his alma mater Oklahoma State under Leonard Hamilton and Eddie Sutton. He coached Tulsa's cross-town rival, Oral Roberts, for four seasons before the Golden Hurricane lured him away.

The school's athletic boosters came together earlier this year to raise enough money to redo his contract there, raising his pay from $350,000 to $550,000. Their effort to keep him also included a deal that would have paid him as much as $1 million if he stayed at Tulsa another five years.